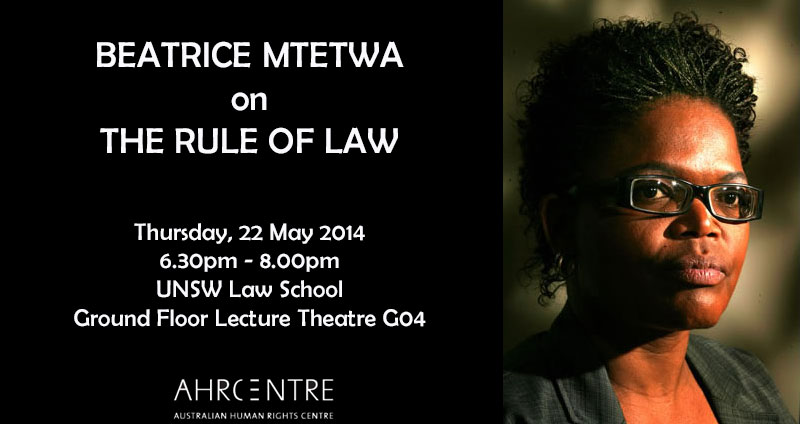 RoLIA is proud to sponsor a public lecture by an internationally recognised Zimbabwean lawyer, Beatrice Mtetwa, on the rule of law…

Beatrice Mtetwa is a Zimbabwean lawyer who has been internationally recognised for her defence of human rights campaigners, lawyers, journalists, NGOs, and opposition candidates. The New York Times has described her as “Zimbabwe’s top human rights lawyer.” Ms Mtetwa has been a prominent champion of fundamental freedoms in Zimbabwe, against significant odds. In 2013, she was arrested, beaten and finally acquitted on charges of “obstructing justice and being unruly to the police.”

In 2005, she won the International Press Freedom Award. The award citation stated that “in a country where the law is used as a weapon against independent journalists, Mtetwa has defended journalists and argued for press freedom, all at great personal risk.” Ms Mtetwa has also been awarded the Ludovic-Trarieux International Human Rights Prize for her “defence of human rights in the world” and the Human Rights Award of the American Bar Association.
The lecture will include a screening of an abridged version of Beatrice Mtetwa and the Rule of Law, and will be followed by a drinks and canapés reception.

The 2014 AHRCentre Annual Public Lecture has been made possible through the support of UNSW Law School and The Rule of Law Institute of Australia.