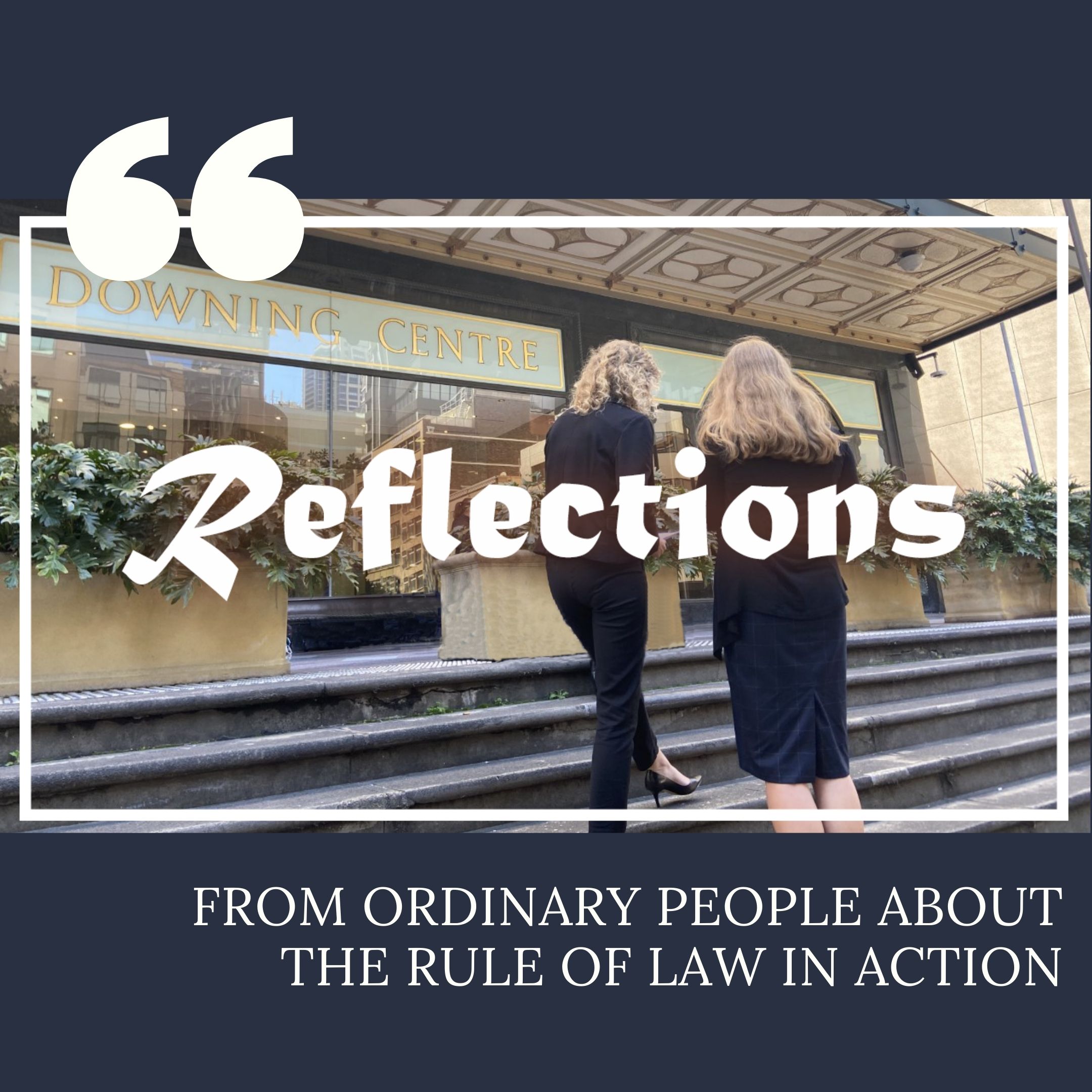 It is very difficult to stand up and protect something you do not know or understand.

Our aim at the Rule of Law Education Centre is to teach Australian students and the community about the rule of law.  We want ordinary Australians to know that no one is above the law, that laws should be applied fairly and equally, that all people are presumed to be innocent until proven otherwise and that laws are to be made by representatives in an open and transparent way with a judicial system that is independent and impartial.

Read below some of the reflections from those who have worked with us as they have grown in their knowledge of the rule of law.

Presumption of Innocence protects against bias

Presumption of Innocence protects against trial by media

After learning about the presumption of innocence, another law student working for the Rule of Law Education Centre posted on the Student Chat :

The allegations placed against Attorney-General Christian Porter have brought to light some prevalent issues surrounding how the presumption of innocence can easily be eroded by public opinion, especially when amplified through the megaphone of social media. However, in the midst of such desperately needed cultural revolution as the #MeToo movement, which is premised on unsilencing female victims, a messy conflict between the public spirit of the law and the established letter of the law emerges.

On the 2nd of March 2021, Porter was alleged of raping a 17-year old girl over 3 decades ago, to which the media has responded, expectedly, with outrage. After Porter denied these claims, a public movement arose for Porter to undergo special inquiry and to be forced out of his position.

The more abstract conflict is how the media is gaining the power to bypass some crucial legal doctrines – namely, the presumption of innocence and the doctrine of equality before the law. Many claim that both doctrines would theoretically be breached if Porter would be forced to undergo a third independent inquiry. This argument comes down to the fact that the first two inquiries had not found him guilty and that to initiate a third would pedestal public fervor over treating the Attorney-General with equal and standard rights.

On the other side of the argument, the outrage surrounding the allegations is fueled by a pursuit of truth, built upon a foundation of rape and abuse cases against women in which the alleged was in fact guilty. We are undoubtedly on a precipice of positive cultural upheaval in this sense – this movement of solidarity, support and sharing truths is long overdue, though with so much rapid societal change, we must be careful to stay anchored to our nation’s legal doctrines so as not to allow “trial by media” to prevail.

It is better that ten guilty persons escape than that one innocent suffer?

After researching about the question “is better that ten guilty persons escape than that one innocent suffer?”, a year 11 work experience student at Rule of Law Education wrote the below:

Covid has been circulating the world like a broken record. The world seems to applaud itself for another broken record of cases and deaths. However, there is nothing else to do than to congratulate the virus for doing such an excellent job. A thousand people died in America yesterday?! No worries: it is just part of natural selection. Humanity has become desensitised to the destruction of death. After all, it is quite natural. But death is not the only way to lose life. Jail is a place where lives go to waste away. A place to order the wrongdoers to sit in a corner and forget to return for them. So be it. But statistics show that around 1 in 14 convicted murderers and rapists are innocent. And as Nowak, the former UN Rapporteur on Torture, said, “prison walls have a double function; to lock people in and the public out,” just proves that ignoring the imprisonment of innocents is easier for everyone.

The nuanced difference between sympathy and empathy was probably the only thing I learnt in my primary school years. Sympathy is somewhat backhanded pity while empathy is often compared to stepping into someone else’s shoes. Even though empathy is advertised as the best, both seem rather detached from reality. Stepping into someone else’s shoes seems rather uncomfortable while pity is only an excuse to be condescending. But how does one understand someone else’s perspective? Less than 0.2% of Australia’s population are currently incarcerated. The answer is very simple; we do not.

Everyone’s experiences of life are different. Although we follow the same perpetual cycle of birth, school, work and death, an individual’s life is led by a spark of some sort. A spark which decides which type of coffee they drink to drug their way through the cycle of monotony. The human spirit is often forgotten in the byzantine routine of life but nevertheless it is there. In the suppressive dystopian of “The Handmaid’s tale” the handmaid is ultimately imprisoned for her transgressions, but the very existence of the novel (a transcript of recordings she illegally produced) serves as a symbol of hope. Her story provides a unique perspective of a world we have yet to experience but nevertheless it stands valuable in this day and age.

The novel “To kill a Mockingbird” provides an example of the miscarriage of justice. Tom Robinson, a black man, was falsely convicted of rape and instead convicted by the engrained racism in the Deep South of the 1930s. A “mockingbird”, symbolic of innocence, is destroyed when Robinson is murdered in jail. Bringing attention to the unjust obliteration of innocence runs parallel to the axiom of an English jurist William Blackstone: “It is better that ten guilty persons escape than that one innocent suffer.” The intent to do no harm sounds easier said than done. However this statement supports that releasing a person due to weak circumstantial evidence is better than accusing an innocent with fallacies. Alleviating suffering, no matter how minuscule, is ultimately the goal rather than convicting the most people.