Criminal v Civil Penalties: The Art of the Deal with Regulators in Australia

The current Australian regulatory regime does not provide significant incentives for companies to self-report misconduct. A Deferred Prosecution Agreement (DPA) scheme has been proposed to address this issue. DPAs are a negotiated agreement between an offender-company and a prosecutor. This agreement requires the company to comply with certain conditions such as paying a fine or implementing a program to better their future compliance with the law. In return, their prosecution is deferred and if the agreement is successfully completed, the prosecution is discontinued altogether, and no conviction is recorded.

A proposed DPA scheme was introduced in Australia by the Attorney-General’s Department in March 2017. The Institute has an interest in this scheme and the enactment of DPA’s as there is a potential that certain elements of DPA’s erode the rule of law due to a lack of transparency. The report analyses the proposed scheme, examines international equivalents and makes a series of recommendations. 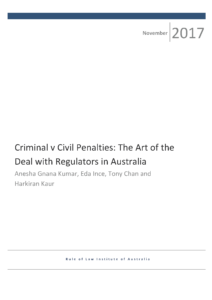 The proposed DPA scheme is… ultimately ineffective in its interaction with the rule of law. The lack of appropriate disclosure requirements and absence of judicial oversight by the Courts will fail to instil public confidence in the justice system with regard to their treatment of corporate misconduct.

The authors propose the following recommendations that aim to increase the efficiency of DPA’s in Australia and uphold the key principles of the rule of law:

1. The UK model should be implemented by introducing judicial oversight in an open court. This model allows DPA’s to be in effect whilst simultaneously ensuring that corporations that have committed serious corporate crimes are brought under judicial scrutiny.

3. The CDPP should be required to publish the entirety of a DPA including materials used in DPA negotiations if a company breaches any term of the DPA.

4. When a breach occurs, the prosecutor should be able to make a request for formal action to the same court that approved the DPA.

5. Legislation should be introduced which regulates the determination between a ‘minor’ and ‘material’ breach to limit the renegotiation capacities of companies when the terms of the DPA are breached.

6. The introduction of whistle-blower protections will encourage reporting of company misconduct.