My presentations to students focused on a range of topics such as the so called ‘Bikie laws’ and laws in Queensland to deal with organised crime, freedom of speech and the right to assemble, with some discussion about the role of the jury system in Australia.

Click on the following buttons to read a synopsis of my talk. RoLIA’s education team is always happy to answer questions on our Facebook page or via Twitter.

It is essential to understand the nature of the organisation from which you are getting your information. As our About Us and Principles sections explain, the Rule of Law Institute of Australia (RoLIA) is an [pl_popover title=”What does independent mean?” content=”We do not support or have affiliations with any political party or government, and act according to the direction of RoLIA’s Governing and Advisory Council” position=”right”]independent[/pl_popover], [pl_popover title=”What does not-for-profit mean?” content=”All our education materials are available free of charge” position=”right”] not-for-profit[/pl_popover] organisation which seeks to promote and protect the rule of law in Australia. We do this mainly through our education programmes which focus on supporting students in schools and universities with resources that help them research, discuss and use rule of law principles to analyse current legal issues.

How do we define the rule of law?

There are many formulations of the rule of law, and the best way for school students to understand its importance is to see how it relates to other major ideas:

The Rule of Law and Human Rights Principles

These principles come from the idea that a person cannot have their rights taken away except by the law, and that all members of society are equal before the law. The rule of law promotes rights such as the presumption of innocence, the right to a fair trial and strongly advocates the importance of an independent judiciary in the protection of individual rights in Australia.

The Rule of Law principle does not judge the content of laws, provided they are clear, accessible and applied consistently by those in power. It does not have a preference for any particular political party in Australia, provided it is democratically elected and there is transparency in the way decisions are made so that members of the community are able to hold the government to account. Freedom to criticise the application of the law, and the role of journalists and the media in keeping the public informed are essential aspects of accountability in an age where the complexity and breadth of law administered by government is too vast for one person to keep track of themselves.

The Rule of Law and Social Justice and Welfare

The rule of law does not directly support principles of social justice; however, access to justice is closely related to the principle of social justice and is essential in ensuring equality before the law. For equality before the law to exist there must be equal access to the courts and legal processes. Questions regarding government funding of legal aid, court and other legal fees, the right to appeal, and the balance between efficiency and fairness in the operation of the court system are areas in which the rule of law illuminates key areas of discussion.

Click the image to download the booklet on Criminal Organisations. See also RoLIA’s summary of legislation and case law.

The Criminal Organisations Control Act 2009 (QLD) was introduced to deal with organised crime gangs which operate in Queensland. This law allows for an organisation such as a motorcycle club to be declared as being involved in serious criminal activity, and for control orders to be made for its members which prevent them from associating with each other. The Queensland laws withstood a challenge in the High Court this year in Assistant Commissioner Michael James Condon v Pompano Pty Ltd [2013] HCA 7. This case upheld the provisions of the law which allow information gathered by police to be declared “criminal intelligence”. Information gathered by police from informants inside these organisations, or from other sensitive sources, is brought before a closed hearing of the Supreme Court of Queensland, where a judge makes a decision about whether to declare it criminal intelligence for the purpose of them making a declaration of an organisation or control orders.

The problem with this process is that it does not allow those who are the subject of the information to question its reliability in court. Closed hearings are against the principle of open justice and greatly diminish transparency. The presumption of innocence is also diminished by the fact that a person can be placed in jail for breaching a control order, without having ever had the opportunity to challenge the evidence used against them. If there is evidence that individuals are involved in criminal activities then they should be charged with a specific criminal offence, not for the act of simply associating. RoLIA’s booklet on the Queensland law provides an explanation in greater detail and some suggested reading.

The actions of some members of alleged criminal organisations, and their associates, have spilled out onto the streets, and include criminal activity which poses a serious threat to society, such as the selling of drugs, money laundering, and other serious criminal activities. While there are serious difficulties in pursuing organised crime this is not a justification for inherently unfair laws. Law enforcement agencies deserve much credit for protecting society from crime, and an important part of this discussion is the extent to which they are adequately resourced to deal with organised crime.

A key question to consider which goes beyond the rule of law objections to these laws is: how can law enforcement agencies be supported by government, the law and the community to deal fairly and effectively with organised crime?

Freedom of Speech and the Right to Assemble

Click the image to download the booklet containing information about free speech and the right to assemble in Australia. See also RoLIA’s paper on freedom of political communication.

Free speech and the right to assemble are very important principles in maintaining the rule of law. The use of power by government should be open to fair scrutiny, and people should be able to assemble in public for a common purpose to voice their opinion. RoLIA’s research guide details a recent High Court case Monis v the Queen [2013] HCA 4 and outlines the right to assemble under Queensland law. There is also a series of training videos which show you how to research High Court cases, see the links below.

RoLIA’s CEO, Kate Burns, has also put together an excellent paper which explains in clear terms case law from the past 20 years to do with the freedom of political communication in Australia. It summarises recent High Court decisions as well as a recent case regarding a public servant’s use of Twitter to attack the government. The central discussion with regard to the rule of law and free speech is this:

Researching and Understanding Judgments from the High Court of Australia

This series of videos takes you through how to find judgment summaries, use a reading strategy to begin to understand a judgment, gather information about a case from its citation, and legal terminology associated with judgments in the High Court of Australia. Download the accompanying notes for:

See our posters and infographics and videos pages for more resources. The following are some new resources on the separation of powers.

A PDF of the poster is avaialable as well as an accompanying worksheet. 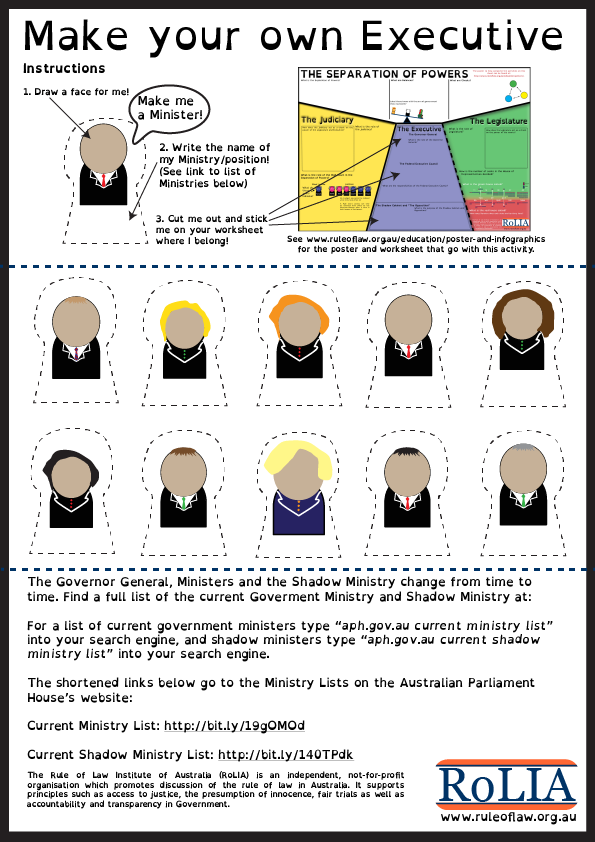 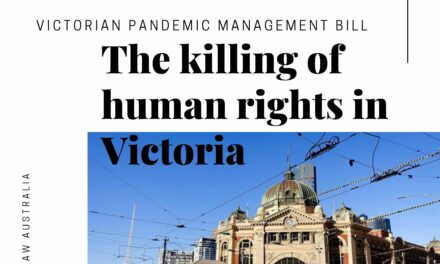