Lessons from George Pell and the Justice System: Protecting the right to a fair trial

Chris Merritt spoke on Sky News and outlined what can happen when there is no respect for the presumption of innocence and its impact on the Pell Case. 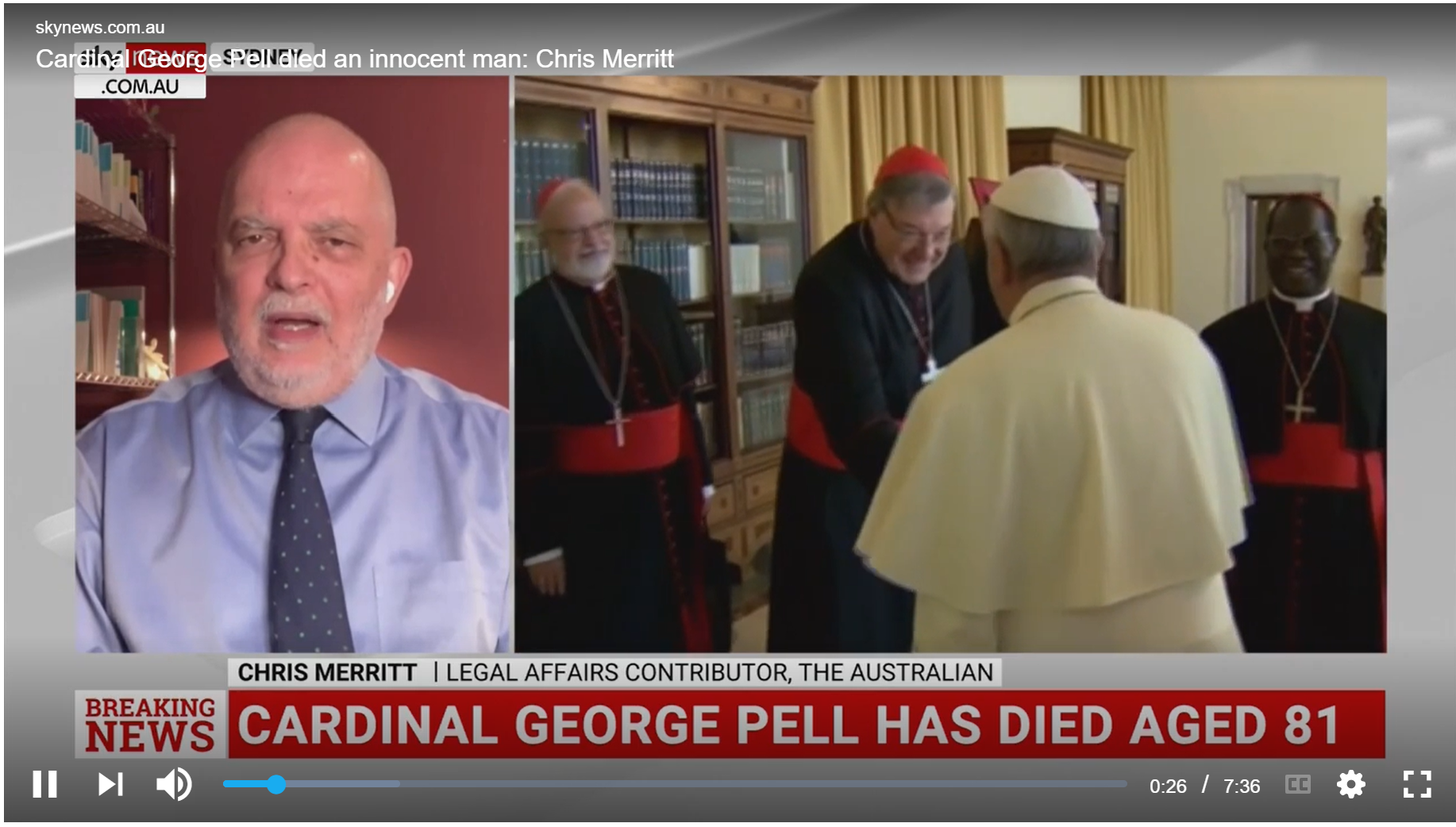 George Pell, Lindy Chamberlain: Injustices like these must not be allowed to happen again

Chris Merritt in his Commentary in The Australian Newspaper on 11 January 2023 wrote:

George Pell, an innocent man, spent 405 days in prison after two great institutions failed to discharge their responsibilities in a proper manner: the justice system and the media.

The result was one of the worst miscarriages of justice in Australian history, ranking alongside the murder conviction of Lindy Chamberlain after her baby had actually been taken by a dingo.

The fact that the Pell and Chamberlain convictions were eventually overturned is no compensation for the damage that was inflicted. These injustices cannot be allowed to happen again.

The clearest lesson from the Pell affair is the need to bolster the presumption of innocence. This is the golden thread that is supposed to run through the justice system, protecting us from the kind of hysteria that almost destroyed the cardinal.

But there is another lesson: despite years of public hostility by much of the media, Pell had no way of avoiding the risk of a biased jury by seeking to be tried by a judge alone.

Trial by jury is an ancient right. But no right is absolute. When it comes into conflict with the right to a fair trial, NSW has shown that judge-alone trials are a viable option.

In the Pell case, many of those in public life – and that includes the media – forgot that they had an interest in upholding the presumption of innocence. By standing back and allowing the courts to do their work, they could have avoided looking like fools once the High Court had ruled.

Instead, significant parts of the media – particularly the ABC – proved they were not immune from the anti-Pell frenzy that swept through parts of society. They overlooked the distinction between an accusation and a proven fact.

In his book Cardinal Pell, the Media Pile-On & Collective Guilt, Gerard Henderson has produced a list of journalists and commentators “who took part in the Pell pile-on over around two decades”. That list, in small type, covers almost a full page.

The Pell affair, just like the Dreyfus affair in France, will forever taint this country’s reputation, and leave a doubt about whether we are really the land of the fair go.

There can be little doubt that Dreyfus, a Jewish army officer, was persecuted because of his religion. That happened on the other side of the planet. But more than a century later, the Pell case shows that little has changed.

The only skerrick of honour from this affair was salvaged by the great dissenting judgment of Mark Weinberg, who refused to go along with the rest of the Victorian Court of Appeal in upholding the flawed jury verdict.

Weinberg’s dissent, which provided the framework for the cardinal’s successful appeal to the High Court, demolished the prosecution’s case.

On Tuesday 7 April 2020 the High Court of Australia handed down a unanimous decision quashing Cardinal George Pell’s convictions for child sexual assault.  A copy of the transcript is found here Pell v The Queen [2020] HCA.

We have prepared a Case Summary highlighting relevant rule of law principles such as beyond reasonable doubt and quotations from the case.