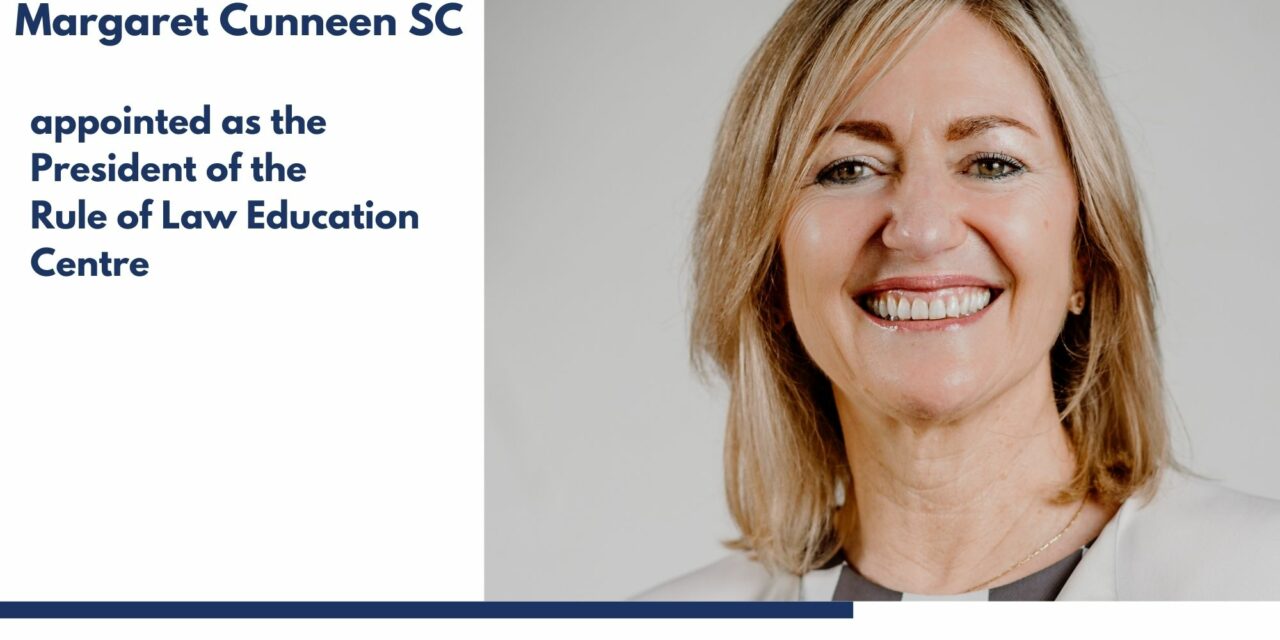 The Rule of Law Education Centre is delighted to announce the appointment of Margaret Cunneen
SC as its new President.

Margaret is a passionate and energetic supporter of the rule of law in Australia and brings a wealth
of experience from her time as Commissioner of the Special Commission of Inquiry into child sexual
abuse allegations in the Catholic Diocese on Maitland-Newcastle, as a Crown Prosecutor for over 30
years and now as a barrister in private practice representing people charged with serious criminal
offences.

Over four decades Margaret has fearlessly upheld the rights of victims and given counsel to those
accused of wrongdoing.

In an address to the Samuel Griffith Society, Margaret said:

“Our common law system, with all its appeals, formalities and procedures, checks
and balances, hard-won evidentiary rules developed for the protection of individual
liberty, may be slow and even arcane. But the hierarchy of the courts, and the many
sets of eyes that review every allegation at every point, ensure that the citizen is not
subject to the arbitrary view of a single person in whom is reposed the functions of
investigator, prosecutor, judge and gaoler. The right to a fair trial is an essential
human right in all countries respecting the rule of law. In fact, the right is much more
widespread than that. Article 11 of the Universal Declaration of Human Rights
declares that: “Everyone charged with a penal offence has the right to be presumed
innocent until proved guilty according to law”….

We must insist that all government agencies remain subject to the rule of law. If we
do not, we can be certain that our hard-won freedoms and protections under the
common law will be inexorably eroded.”

Throughout her career Margaret has also actively engaged with students at universities and schools.
As a member of the NSW Bar Council in 2006, Margaret developed the Bar Association’s Barristers in
Schools Program, which she ran until 2012, to give primary school students an introduction to the
law and how it works. Margaret was for many years a part-time lecturer at the University of New
South Wales in legal aspects of child abuse and neglect. She delivered the Sir Ninian Stephen Lecture
at the University of Newcastle in 2005 and has been the guest speaker at Law graduations at
Macquarie University, the University of Technology, Sydney and the College of Law. The University of
Technology, Sydney and Macquarie University honoured her in 2013 with the inception of the
Margaret Cunneen SC Witness Examination Competition, which she has judged each year since then.

Margaret’s passion for the law, human rights and education will be critical to her role as President as
she oversees the creation of resources for students to help them understand the key pillars of the
rule of law, democracy and human rights and the Centre’s advocacy and submissions regarding the
breaches of those pillars by those in power.