The World Justice Project has published its Rule of Law Index for 2019. Australia’s global ranking has dropped from 10th (2017-2018) to 11th, but remains second in the East Asia and Pacific region behind New Zealand. The Institute welcomes this crucial report that assesses the state of rule of law in Australia through a rigorous and independent survey.

“Effective rule of law is the foundation for communities of justice, opportunity, and peace,” said William H. Neukom, WJP founder and CEO. “No country has achieved a perfect realization of the rule of law. The WJP Rule of Law Index is intended to be a first step in setting benchmarks, informing reforms, stimulating programs, and deepening appreciation and understanding for the foundational importance of the rule of law.”

Countries are ranked on the following rule of law indicators with various factors ranked individually within each indicator:

* absence of corruption (in government)

The most marked drop for Australia was in absence of corruption, dropping globally from 12th to 14th. Though confidence in the judiciary and police remained high, absence of corruption in the legislature dropped from 0.65 (2017-2018) to 0.60. Regulatory enforcement dropped globally five places from 7th to 12th.

Under the factors for civil justice, Australia scored poorly for accessibility and affordability (0.62), no unreasonable delay (0.68) and no discrimination (0.70). These were well below other high income countries such as the Netherlands, Denmark, Germany and New Zealand, and on par with France (ranked 18th globally).

However, in good news, open government jumped globally three places to 6th. Crime appears to be effectively controlled, and civil conflict effectively limited, and the incidence of violent redress does not appear high, this latter factor on par with the United States and United Kingdom, though well below New Zealand.

“This slide in rule of law in general and checks on government powers in particular is deeply concerning,” commented Elizabeth Andersen, executive director of the World Justice Project. “There is a crucial difference between “rule by law” and “rule of law.” In too many countries, laws and legal institutions are being manipulated to undermine rather than uphold the rule of law, even as governments wrap their actions in “rule of law” rhetoric.” 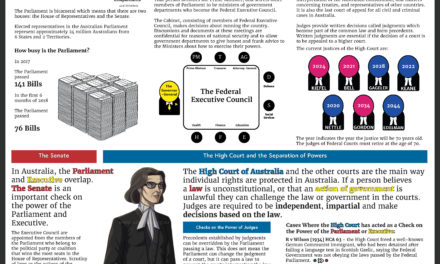