What is the role of a Chief Justice?

1. Exercises Judicial power as a judge

First and foremost, a Chief Justice is a judge of the Court.   The duty of all judges is to administer justice according to law, without fear or favour, and without regard to the wishes or policy of the executive government.  The Chief Justice should lead by example and exhibit the necessary independence, impartiality, fairness and competence required by all members of the judiciary.

2. Is Responsible for the administration of the Court

The Chief Justice is responsible for the administration of the Court and allocates cases and distributes judicial workload. The Chief Justice also determines the appropriate protocols regarding access to Courts such as the Supreme Court Covid Protocols.

3. Is the Spokesperson for the Court

Most importantly, the Chief Justice is the spokesperson and representative of the Judiciary and the Courts in its dealings with the executive government and the community.

As Alexander Hamilton in The Federalist Papers in 1788 pointed out, the judiciary is the “least dangerous branch” of government, since it has “no influence over either the sword or the purse.”  Its power comes from the impartial and independent judgments that are generally accepted and complied with by the people and those in government. Accordingly, Hon Malcolm AC QC states

“It is necessary to remind the public and the other arms of government that the judiciary is an equal and independent arm of the government. The Chief Justice must be ready to speak for the judiciary of the nation, or of a State or Territory, on issues such as those that affect judicial independence and attacks on the judiciary.”

As a spokesman, the Chief Justice promotes and protects public confidence in the judiciary.  Former Chief Justice of Australia, Hon Gleeson AC GBS QC in 2002 said

“Confidence in the judiciary does not require a belief that all judicial decisions are wise, or all judicial behaviour impeccable, any more than confidence in representative democracy requires a belief that all politicians are enlightened and concerned for the public welfare.  What it requires, however, is a satisfaction that the justice system is based upon values of independence, impartiality, integrity, and professionalism, and that, within the limits of ordinary human frailty, the system pursues those values faithfully.”

On the 7th of March 2022, The Honourable Andrew Bell was sworn in as the 18th Chief Justice of the Supreme Court of NSW.

The Rule of Law Education Centre met with His Honour in the below interview to discuss the state of the rule of law in Australia.

The Significance of the Supreme Court

Chief Justice Bell during his swearing in speech stated:

“The significance of the work of the Supreme Court of New South Wales extends far beyond the resolution of the several thousand cases it deals with each year. As important as the quelling of controversy in any given case is to the parties involved, every decision given reinforces and publicly affirms the fact that we have, in this State, a system of justice that is administered fairly and impartially, in open court, by judges who are independent of the executive government, and who are of the highest integrity and calibre. It is a system of justice in which the citizens of New South Wales may have confidence and without which the rule of law on which our democracy rests would be an empty letter.”

The Role of Education

During His Honour’s interview with the Rule of Law Education Centre we asked His Honour whether enough people understand the principle of the rule of law as the thing that sets us apart from authoritarian regimes. In response he said:

“explaining the role of the rule of law, which at its core, is the antithesis of arbitrary rule and the arbitrary exercise of power. I think that explaining the rule of law in those terms is very important in the context of contrasting our society and our community, with the examples of authoritarianism, which we are seeing on the rise.

I go back really to what I said at the outset, it’s something that simply can’t be taken for granted. It’s a value which needs to be understood by the young people coming through schools and universities, who become, as voters and adults, a critical part of our democracy, so that’s why there needs to be a sense, not only constant vigilance, but also strong educational initiatives, that are taken to make sure that an abstract concept is understood to have very concrete ramifications.

That really is, I think, the challenge for the rule of law. Lawyers and people concerned with the health of our democracy have a good understanding, but its an abstract concept that has lots of, it operates at all sorts of different levels. And the important challenge is to translate the abstract into the concrete, so that its with the concrete understanding of why it matters, that I think is the challenge for those concerned, to ensure that our society remains as we would all wish it to be. “

The Importance of Judicial Independence

During His Honour’s swearing in speech he said:

“Nor do I want to see a society in which a political leader says, as a former United States President is reported to have said, that he expected his judicial nominees to the “do the right thing” by his or her appointor. That frankly medieval notion is anathema to and corrosive of a fundamental tenet of a modern democracy.

These examples supply powerful reasons why public education as to the role of the courts, the importance of judicial independence and respect for the rule of law in our civic society is essential.”

This reference to “do the right things” is in relation to a tweet made by Former US President Donald Trump in 2015 during his election campaign, after promising to repeal the Affordable Care Act, commonly known as Obamacare. Chief Justice Roberts famously voted to preserve most of the ACA in NFIB v Sebelius (2012) and later rejected arguments in King v Burwell (2015), which sought to undercut the ACA. 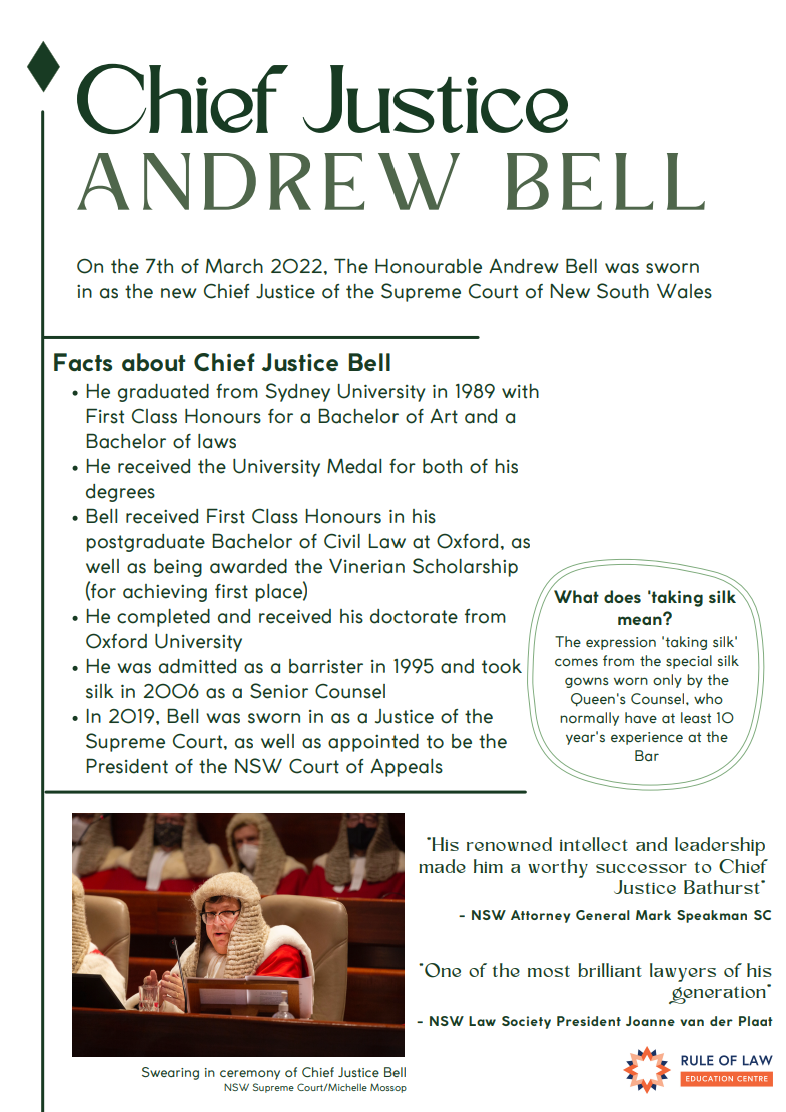