Perhaps as a result of its unwieldy name, this case has often been regarded as a poorer cousin to other well known High Court cases, like Mabo or the Communist Party case. Nevertheless, In re Judiciary Act has played a major part in the development of the Australian legal system.

This article will review the decision, and trace its impact on the Australian legal system, and the rule of law issues that it raises.

The background of the case

In re Judiciary Act concerned the capacity of the High Court to give so-called “advisory opinions”, that is, non-binding opinions about the constitutional validity of a law not yet in effect.

In 1910, the Judiciary Act 1903 (Cth) was amended to insert Part XII, which allowed the Governor-General to refer “any question of law as to the validity of any Act or enactment of the Parliament” to the High Court for consideration. The Court would hear arguments about the law, and then issue a decision about its validity.

For over a decade, the power went unused, and unchallenged.

Then, in 1921, the federal Parliament amended the Navigation Act 1912 (Cth). The Governor-General sought to refer these amendments to the High Court, for a determination as to their validity. Before that question was answered by the Court, the Victorian Attorney-General (represented by the future Justice and Chief Justice, Sir Owen Dixon) challenged the very basis for the referral: Part XII of the Judiciary Act.

Victoria’s argument was that Part XII was not supported by sections 75 or 76 of the Constitution, which were the only sections by which it could have been supported.

(i)  arising under any treaty;

(ii)  affecting consuls or other representatives of other countries;

(v)  in which a writ of Mandamus or prohibition or an injunction is sought against an officer of the Commonwealth;

the High Court shall have original jurisdiction.

The Parliament may make laws conferring original jurisdiction on the High Court in any matter:

(i)  arising under this Constitution, or involving its interpretation;

(ii)  arising under any laws made by the Parliament;

(iii)  of Admiralty and maritime jurisdiction;

(iv)  relating to the same subject-matter claimed under the laws of different States.

Victoria’s argument turned on the word “matter” in each section.

That word, Dixon argued, included only situations where some actual claim of right was in litigation between parties, and excluded abstract questions of law, like the question of the validity of the amendments to the Navigation Act. This argument was very similar to the jurisprudence surrounding the Case or Controversy Clause in Article III in the United States Constitution, which is interpreted in the way Dixon was suggesting.

Victoria accepted that giving an advisory opinion was an exercise of judicial power, but – foreshadowing Dixon’s judgment in the more famous Boilermakers’ case – argued that judicial power could only be conferred in accordance with Chapter III of the Constitution. Since nothing in that Chapter permitted the conferral of advisory jurisdiction – and indeed, restricted the conferral of jurisdiction to “matters” – Part XII was invalid.

In contrast, the Commonwealth argued that Part XII was supported by the “incidental power” in section 51 (xxxix) of the Constitution, which read:

The Parliament shall, subject to this Constitution, have power to make laws for the peace, order, and good government of the Commonwealth with respect to:

Conferring advisory jurisdiction on the High Court was a way of Parliament assisting the Executive to carry the law into effect, as contemplated by section 61 of the Constitution:

Thus, if the conferral of advisory jurisdiction was ‘incidental’ to the execution of power vested by the Constitution in the “Government of the Commonwealth” under section 61, then Parliament had power to pass the amendments to the Judiciary Act, under section 51 (xxxix).

Moreover, argued the Commonwealth, an advisory opinion was not an exercise of judicial power, so sections 75 and 76 were not relevant to the decision.

The High Court rejected this argument, and agreed with Owen Dixon and Victoria. By a 5:1 majority, the Court found that advisory jurisdiction was an exercise of judicial power, and that it was not allowed under the Constitution.

In our opinion, there can be no matter within the meaning of the section [section 76 of the Constitution] unless there is some immediate right, duty or liability to be established by the determination of the Court.

The only judge to dissent, Justice Henry Higgins, argued that deciding whether advisory jurisdiction was an exercise of judicial power or not was “immaterial”:

The determination sought is to aid the Government in the carrying out of its executive functions; and that is enough.

Justice Higgins went on the provide examples of other courts that provided advisory opinions to governments, such as the Privy Council in the United Kingdom, and the Supreme Court of Canada, concluding:

The separation of the legislative, executive and judicial powers under the Constitution leaves these arms of the Commonwealth interdependent. In Australia, executive Ministers must sit in the Legislature (not as in the United States); and Parliament can regulate the working of the judicial power. There is nothing in the separation of powers that necessarily involves that the High Court cannot be employed to aid the Executive.

Despite His Honour’s objections, Part XII of the Judiciary Act was found to be invalid, and so the question of whether the amendments to the Navigation Act were valid would have to wait until another day.

The prospect of advisory opinions raises a number of rule of law issues. These weigh both in favour of, and against, the conferral of advisory jurisdiction on courts.

On the one hand, advocates for advisory jurisdiction say that these opinions would promote certainty. That is, the community would be more assured that laws were valid if they were ‘vetted’ by a court before they took effect. This would mean that, when people acted in accordance with their statutory rights and obligations, they could be more certain that the law would not be overturned down the track.

In addition, advocates argue that there is a moral benefit to advisory jurisdiction too: people should not be obliged to obey laws that are constitutionally invalid. Advisory opinions would protect people from being policed on their obedience to a law that was not within the power of Parliament to pass. In addition, it would protect them from this, without the need for them to engage in expensive litigation with the government or each other to vindicate their rights.

On the other hand, opponents of advisory jurisdiction point to the dangers of undermining the appearance of judicial independence. Advisory opinions, so they say, would give the appearance of the court acting as an adviser to the government of the day, undermining public confidence in its capacity to act independently in other cases.

Finally, opponents argue that advisory jurisdiction would not produce the best arguments for and against the law, meaning court decisions would be based on substandard materials. At the heart of our current adversarial court tradition is the idea that the best arguments for and against a proposition are made by people who have ‘skin in the game’; that is, people whose rights and obligations are actually involved in the decision at hand. Advisory jurisdiction may involve relying on the arguments of people whose interests are not at stake. Not only may this produce less satisfactory arguments, but it is also potentially a disenfranchising move. Instead of a system where anybody may make arguments about laws that affect them personally, without regard for class or education or wealth, a system of advisory jurisdiction may rely more exclusively on highly educated professional interest or advocacy groups to make arguments, excluding the voices and participation of others in the legal system.

There seems scant possibility of the High Court revisiting its judgment in In re Judiciary Act. The requirement to have some immediate right, duty, or liability needing determination continues to be a key feature in determining whether a court in Australia has jurisdiction to hear a matter.

Any push for change, therefore, would probably need to come through constitutional amendment, with all the difficulties attendant on that process. Opponents of advisory jurisdiction can take comfort from the fact that countries like the United Kingdom or Canada do not seem to be experiencing a rule of law crisis as a result of their courts becoming unduly involved in the legislative process, or disenfranchising individual litigants.

Nevertheless, today we can reflect that, despite the stricter interpretation put on our Constitution by the High Court 95 years ago, the rule of law in Australia largely continues to be upheld and protected. To the extent that it is threatened, In re Judiciary Act is probably not to blame.

‘Advisory opinions, the rule of law, and the separation of powers‘, Helen Irving 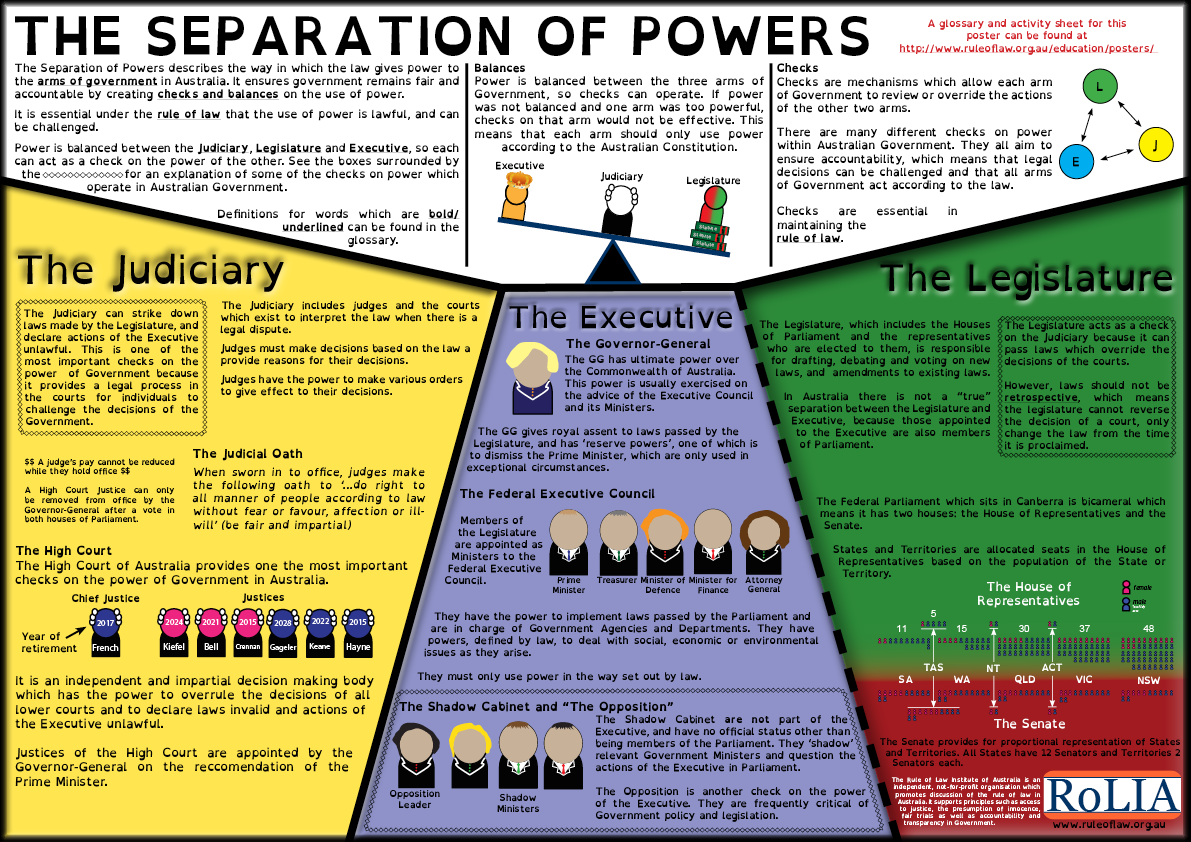