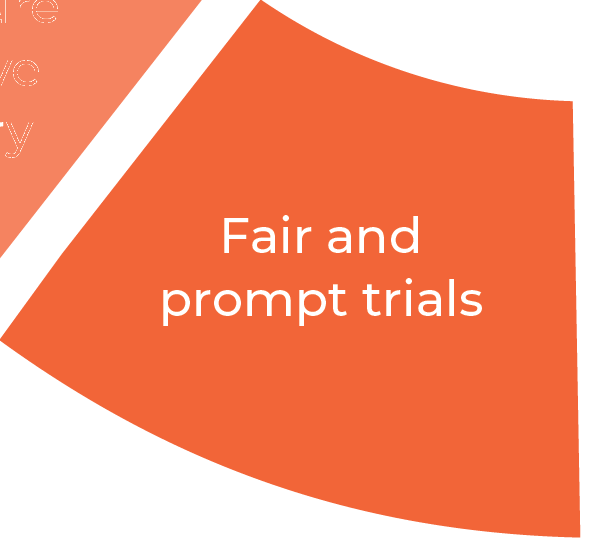 All people have the right to a fair and prompt trial, on the basis that all citizens are considered equal before the law.

A fair trial is a fundamental right that stops innocent people from being falsely convicted of a crime and is considered the ‘birth right of every citizen.’  It not only protects individuals’ liberty, reputation and other fundamental rights it also maintains public confidence in the judiciary and the decisions that are made.

Fairness means fairness to both sides in the trial. According to Bingham:

The procedure followed must give a fair opportunity for the prosecutor or claimant to prove his case as also to the defendant to rebut it. A trial is not fair if the procedural dice are loaded in favour of one side or the other

Other rule of law concepts such as the presumption of innocence, model litigant rules and separation of powers all ensure that both sides, particularly the accused receive a fair and just trial.

Furthermore, the concept of fairness is constantly evolving and as stated by Dean J in Jago, “the identification of what does and what does not remove the quality of fairness from an overall trial must proceed on a case by case basis and involve an undesirably, but unavoidably, large content of essentially intuitive judgement.”

Many attributes of a fair trial are found in common law with the Courts traditionally holding the power to ensure the overall criminal trial process is fair. They are also found in International treaties such as Article 14 of the International Covenant on Civil and Political Rights (ICCPR) and some State/Territory Human Rights Acts such as the Charter of Human Rights and Responsibilities Act 2006 (Vic).

Human Rights and a Fair Trial

Fair trial rights are contained in Article 14 of the International Covenant on Civil and Political Rights (ICCPR).  These include:

Many of these rights are interrelated and also considered principles of the rule of law.

A ‘prompt’ trial refers to the right individuals have to a speedy trial, the right to be tried within a reasonable timeframe, and the right to be tried without undue delay. Anyone arrested or detained on a criminal charge shall be brought promptly before a judicial officer who will, as far as possible minimise the curtailment of a person’s liberty and disruption to someone’s life.  A prompt trial is also more likely to be a fair trial, if only because witnesses’ memories will be fresher.

The contrasting position of a delayed trial should be considered here.  Delayed trials intensify the strain and tension associated with a pending trial and the consequences include increased legal costs, the memory of witnesses fading and their testimony being lost through death or other misadventure.  In cases involving intense media interest, delays also risk influencing empanelled jury members and their ability to remain unbiased.

From the Magna Carta we have the principle that all citizens, including those in power, have the right to a fair and prompt trial.

Ideally, under the rule of law, all people will be treated equally and fairly by the law and given the same consideration: regardless of their position and wealth in society, their race, gender, nationality, or beliefs. This ensures everyone receives a fair trial, without improper influence or corruption.

Clause 21: Are not to be amerced except by their peers and not except in proportion to the nature of the offence.

Clause 39: No free man shall be seized or imprisoned, or stripped of his rights or possessions, or outlawed or exiled, or deprived of his standing in any other way except by the lawful judgement of his equals or by the law of the land.

Clause 45: We will not appoint justices, constables, sheriffs or bailiffs except from such as know the law of the kingdom and are willing to keep it well.

Clause 40: We will not sell, or deny, or delay right or justice to anyone.