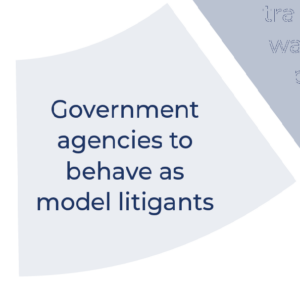 Model litigant rules (obligations) are guidelines for how a government ought to behave before, during, and after litigation with another government body, a private company, or an individual.

It is vital that government bodies should not be ‘out to get’ people, but should be acting in the public interest, according to law.  These guidelines seek to address an inherent and substantial power imbalance.

See our comprehensive Analysis of the Model Litigant Rules here.

In civil litigation, there can sometimes be a significant imbalance of power between government agencies and other parties to the proceedings.  Government agencies may have access to substantial resources, powers to investigate, greater power to compel people to provide information, and/or greater experience and expertise in dealing with complex and contentious legal matters.  For these reasons and many more, it is vital that government agencies behave ethically, fairly and honestly in their dealings with other parties and model best practice in litigation.

In civil litigation matters, the rules provide that government agencies should, wherever possible:

However, these guidelines are not designed to prevent the government body from “acting firmly and properly to protect their interests,” taking “all legitimate steps” to pursue or defend claims, or even from “pursuing litigation in order to clarify a significant point of law even if the other party wishes to settle the dispute.”

The guidelines are designed to tread a middle ground. On the one hand, they recognise that a government body is often better-resourced than small companies or individuals, and is supposed to lead by example, protecting the public interest as opposed to its own private interest.

On the other hand, the guidelines also must recognise that government bodies pursuing or defending claims are doing so on behalf of the public, and the public’s rights ought not to be undermined in the face of genuine litigation. This is particularly so when the government body is up against, for example, a very well-resourced individual or company.

A Case Note has been prepared which considers the case Walpole & Secretary. The Case Note considers the judgment of the Full Court of the Family Court of Australia and their observations regarding the Agency’s breaches of its Model Litigant Obligations.  Reflection questions look at the Model Litigant guidelines and what action should occur to hold the agency accountable.

The Rule of Law Institute of Australia wrote an open letter to the Attorney General asking:

In the litigation between Andrew Laming and Louise Milligan the ABC apparently failed to act honestly and fairly as required by the Model Litigant Rules (Merritt C, 2021, ‘Taxpayers pay the price for an unapologetic ABC’s defamation disaster’, The Australian, 13 August).

This failure would normally be subject of the legal proceedings at the time, but by section 55ZG of the Judiciary Act, compliance is not legally enforceable except by or upon your application.  Here the failure has not been made enforceable in the courts.  Instead, there are self-reporting requirements to you by the agency which has breached the rules and by sanctions for non-compliance.

Direction 14.1 provides: The Attorney-General may impose sanctions of non-compliance with the Directions

In the absence of legal proceedings, and consistent with your responsibility for Commonwealth agencies to behave as model litigants, what sanctions have you imposed or do you intend to impose?

Chris Merritt brought this matter to attention in his Australian article, ‘ABC not a model litigant in Andrew Laming defamation’ which was then picked up in the Senate estimates hearing the follow week of ABC managing director, David Anderson.  In response, in his article ‘ABC must live up to the ‘model litigant’ standard’ Chris Merritt called for the re-introduction of the model litigant obligations into legislation and stated:

After witnessing the way the ABC conducted itself in the Milligan litigation, the time has come to revisit this issue.

And a good starting point is a 2017 bill that might have prevented the ABC from conducting itself like some sort of government-backed litigation funder – had the bill not been allowed to lapse. The Judiciary Amendment (Commonwealth Model Litigant Obligations) Bill would have empowered the Commonwealth Ombudsman to investigate complaints that federal government litigants had failed to adhere to the model litigant rules.

This bill, unsurprisingly, faced opposition from the federal bureaucracy which would have been subjected to an effective system of accountability for its conduct in court. This bill, which had been introduced by former senator David Leyonhjelm, would have empowered a court to stay proceedings while the Ombudsman considered a complaint.

If a court were satisfied that a Commonwealth litigant had breached, or was likely to breach, the model litigant rules, the court would have been empowered to make any order it considered appropriate. The strength of this approach is that enforcement would not be politicised. Ordinary people who found themselves in legal disputes with government agencies would have a way of ensuring the financial clout of the Commonwealth could not be abused by bureaucrats.

As an aspiring model litigant, this approach should be welcomed by the ABC.

In 2015, the Institute made a submission to the Inspector-General of Taxation’s Review into the Taxpayers’ Charter and Taxpayer Protections, arguing that:

“Taxpayers need to be confident that the tax laws will be administered fairly. The model litigant rules seek to impose the basic duty of fairness on all Commonwealth agencies, including the ATO. These rules should be enforceable and complaints dealt with transparently.”

Download the submission: Submission to the Review into the Taxpayers’ Charter and Taxpayer Protections.

The Institute will continue to promote community awareness and understanding of the importance of the model litigant rules at both a State and Federal level, with a view to securing the consistent compliance of government bodies with their model litigant obligations.

Detailed explanation of the nature of the Commonwealth’s model litigant obligations and  the oversight and compliance undertaken by the Attorney-Generals Department, with our critique of the current compliance framework. 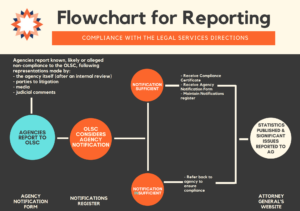