Laws must be made in an open and transparent way by the people as it gives members of society the right to participate in the creation of laws that regulate their behaviour and govern their actions.

Australia is a democracy in which eligible Australian citizens vote for representatives to carry out the business of governing on their behalf.
Therefore, it is an important responsibility for citizens to identify priorities for themselves and to actively engage in the decision-making process. 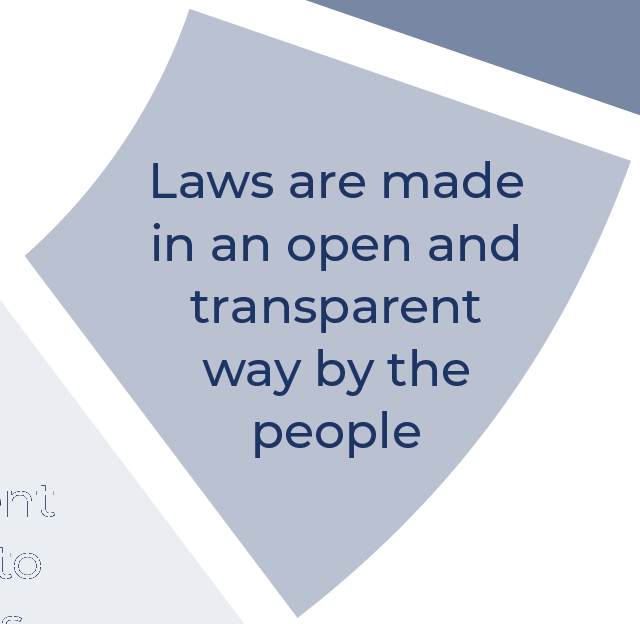 Through active participation in their community and sharing in decision-making about the laws which govern them, citizens enjoy a sense of mutuality and empowerment.  Citizens who know what action can be taken where there are issues of concern regarding laws enjoy a sense of trust and respect for the laws that regulate them and their behaviour and are more likely to support them.    Similarly, Australia’s system of governance ensures the government remains accountable to the people and everyone works together to uphold important values and beliefs.

Laws are made by Parliament at federal and state level. New laws (also known as bills) must be debated and passed by a majority vote in both Houses of Parliament.  The Australian public can find out about existing or proposed laws at any time by visiting federal, state or territory Parliament or their respective websites.

Parliament conducts its business in public.  This open system of government ensures transparency and provides opportunities for citizens to become involved in their own governance.  Genuine citizen engagement in the laws that govern them legitimises the decisions and policies that governments make.

After a bill passes through Parliament and is signed, it becomes a law – an Act of Parliament – and cannot be easily changed. After something becomes law, it applies to everyone, including the law makers themselves!

The following mantra applies to the concept of citizen participation in law and policy making: sunlight is the best disinfectant.  Citizen engagement coupled with a system of governance that is open, transparent and accessible to the public are critical in maintaining public confidence.

Allowing citizens to participate purposefully in their own governance encourages peaceful avenues of civic engagement and strengthens democracy.