On the arrival of the First Fleet in 1788, Europeans establish a penal colony on our shores in response to the mass social upheaval that had developed back in the British homeland. It was a means to an end of a dilemma the British establishment desperately wanted to go away, a solution to a very large problem. Most convicts were unwilling participants in this experiment and became the latest group of migrants to land on the Australian continent. Their existence and struggle helped shape Australia’s identity to become what it is today.

Read and learn about how a British law called terra nullius brutally impacted the lives of the indigenous people during this time.
The consequences of this law, and often brutal behaviour of the new colonists caused extensive loss of life and displacement of indigenous populations, ultimately depriving indigenous peoples of retaining ownership of the land they had inhabited for thousands of years up until 1788. 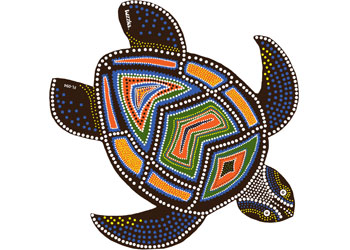 Aboriginal and Torres Strait Islander Peoples were residents of Australia long before European settlement in 1788. Their history dates back over 50 000 years ago. They were a culture of many nations, each one with established customs and traditions of their own. Different and unique language groups identified individual indigenous nations across the land.

Your students can learn about the British Law terra nullius. This law was to become the justification for European occupation over the original inhabitants of the land. 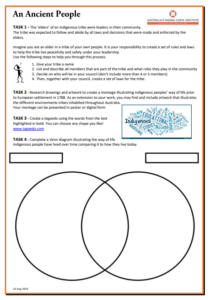 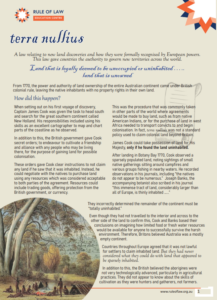 The successful voyage of Captain James Cook resulted in the discovery of a great new land in the southern hemisphere. After the American Revolution refused to accept any more convict transports, the British Government decided to establish a penal settlement in Australia. This new land was an isolated island a long way from home, providing the perfect deterrent for any convict who harboured thoughts of escape. 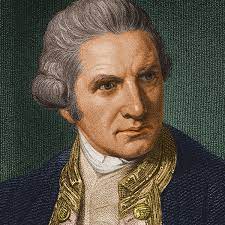 Lord Sydney and the Plans for the Penal Colony

In 1780’s, the British parliamentary minister called Thomas Townshend was the Home Secretary in the British cabinet. His responsibilities in this role included immigration and citizenship. He was also given the task of organising the relocation of convicts to other parts of the world, particularly after the option of sending them to the Americas had been stopped due to the War of Independence around that time.

Townshend was awarded peerage for his work and became Lord Sydney in 1783. It is under this title, Lord Viscount Sydney, that the city of Sydney in New South Wales, Australia was named after!! 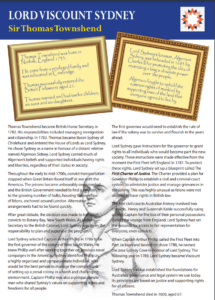 Lord Sydney was a man of compassion who felt a great responsibility in maintaining the rights of individuals, regardless of their unfortunate circumstances or position in society. So, when preparations were being made for the First Fleet of convicts to sail to Australia, he set out to write a Charter of Justice. This Charter would provide a plan that could be used to guide the new society, in accordance with British justice expectations and based on principles from Magna Carta. This plan was to be implemented by the commanding officer in charge of the colony to avoid a dangerous and lawless society developing from the early days of settlement.

Arthur Phillip and the First Charter of Justice

Lord Sydney also chose Captain Arthur Phillip to fill that role as the first governor of New South Wales, as he believed this was a man of great integrity and fairness who would be sympathetic to the plight of the poor souls being transported.

In the initial days of arrival, the colony was still essentially a prison facility and Captain Phillip looked to the Charter of Justice written by Townshend for guidance and direction. The challenge was great as his officers were going to be dealing with convicts who had endured everything to survive and were afraid of nothing.

The Charter of Justice was first established on January 26, 1788 when Governor Arthur Phillip landed in Botany Bay. It outlined how the colony had to be structured, with new language and terminology.

It left some traditions of the old British legal system such as how the common law would be implemented, but also included the new ideas about freedom of liberties and individual rights, that were still emerging throughout the 18th century.
Some traditions needed to be changed in order to cater for the challenging society that was being established. It was not going to be like the British class system of entitlement; such as first class, second class, and the peasants. 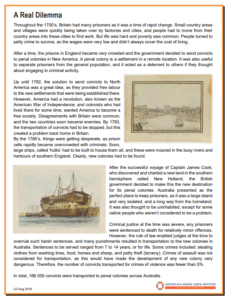 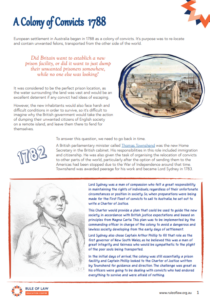 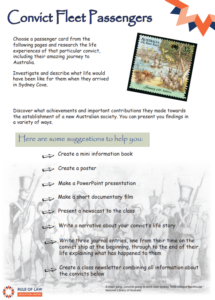 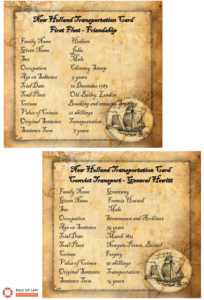 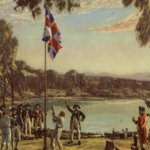 The first five governors of New South Wales were instrumental in the development of Australia since Europeans arrived on the First Fleet in 1788. Governors Arthur Phillip, John Hunter, Philip Gidley-King, William Bligh, and Lachlan Macquarie were given the momentous task of establishing and managing the development of a new British society on the other side of the world. Each one fought for fairness and justice to prevail in a rapidly changing and dangerous environment.

Their challenge was to establish a new colony with the unwanted felons who were rejected by British society.

Click on an image to go to each section

Colonial Capers! is a fun way for your students to develop their knowledge and understanding about the contribution of past people, who have shaped the course of Australian history, and learn about the nature of history from key changes that have occurred in the past. 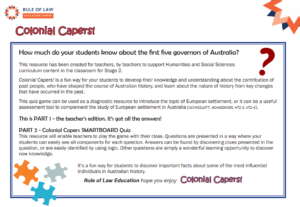 This resource will enable teachers to play the game with their class. Questions are presented in a way where your students can easily see all components for each question.

Answers can be found by discovering clues presented in the question, or are easily identified by using logic.

Other questions are simply a wonderful learning opportunity to discover new knowledge.
It’s a fun way for students to discover important facts about some of the most influential individuals in Australian history.

Commemorate the Eureka rebellion when gold miners stood against colonial forces in a field at Eureka, near Ballarat Victoria on December 3rd 1854. 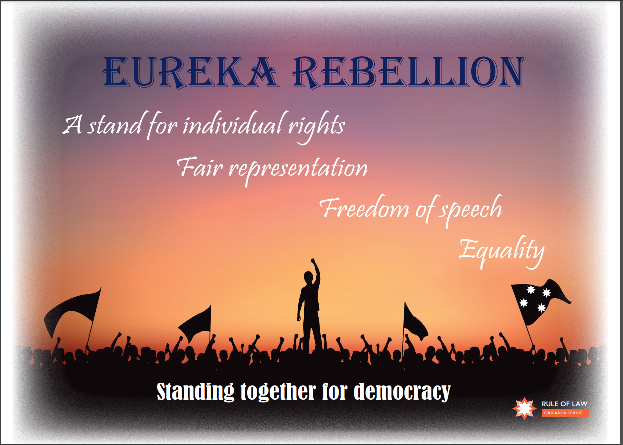 Eureka was the moment a democratic movement seized control of the political agenda by asserting its rights. A time when the people demanded equal and fair treatment, and the right to take part in the democratic process.

The key values that underpin Australia’s democracy have come from shared values and beliefs. Values such as freedom, equality, fairness,
and justice in the Australian system of government – to be given the opportunity to have a ‘fair go’. Human rights are consistent with these values: respect, inclusion, civility, responsibility, and compassion.

Students can learn about the individuals whose contributions made a difference in achieving representative democracy, benefitting all Australians today. 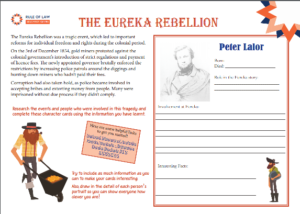 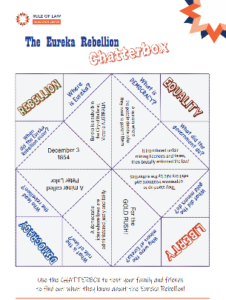 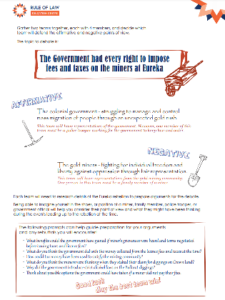