No Retrospective Laws Should be Made

Retrospective laws may undermine the rule of law by unfairly changing the laws relating to certain situations. People cannot plan their lives and make sure they act within the boundaries of the law if the law can be changed so that their actions – legal at the time – later become illegal. 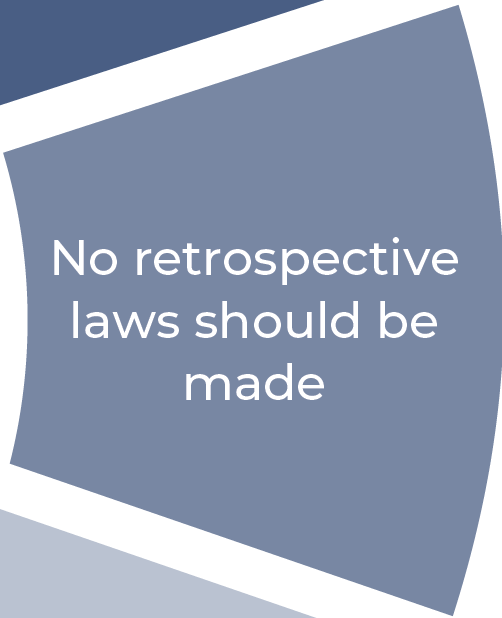 This power sits uneasily with the rule of law principle, which requires that the law is capable of being known to everyone so that everyone can comply.  Similarly, a person cannot know and comply with a law that does not yet exist.

Public authorities must clearly outline in advance what constitutes compliance with the law so individuals can act legally and understand when they are breaking the law.

Article 15 of the International Covenant on Civil and Political Rights, which prohibits retrospective criminalisation unless the person’s conduct, “at the time when it was committed, was criminal according to the general principles of law recognised by the community of nations.” In such situations a retrospective law could coexist with the rule of law.

2. Nothing in this article shall prejudice the trial and punishment of any person for any act or omission which, at the time when it was committed, was criminal according to the general principles of law recognized by the community of nations.

However, where a person is not put on notice, or where their conduct is not so reprehensible that they should have known better, retrospective laws do not sit well alongside rule of law principles.

Nucoal is an example of the detrimental impact of retrospective legislation.  Watch Chris Merritt discuss the damage that occurs when retrospective laws are introduced.

The High Court first considered the validity of a retrospective law in 1915 in the case of R v Kidman HCA 58 (1915) and was later challenged in Polyukhovich v Commonwealth HCA 32 (1991).

For more details, read our article on Retrospective Legislation.