People can only be punished in accordance with the law 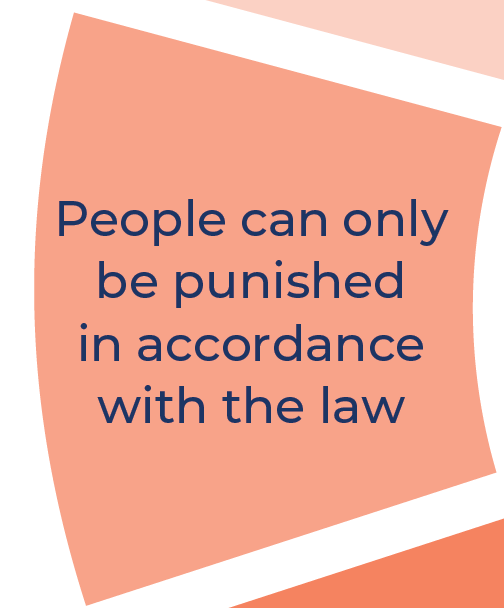 It is better for the law to rule than one of the citizens … so even the guardians of the laws are obeying the laws.

The law must be sufficiently defined and government discretion sufficiently limited to ensure the law is not applied in an arbitary manner.

Governments often want to be seen to be tough on crime, but it is important that the punishment fits the crime and any new legislation does not impose overly harsh punishments. Only the law can define a crime and prescribe a penalty.

The Australian criminal justice system is designed to protect community members and their property.  It also protects innocent and vulnerable members of the community who are unable to protect themselves, such as children.  The law envisages that people who are in breach the law can be punished by a variety of means, including fine, imprisonment and/or community service.  Regardless, punishment must take place in a manner that is proportionate to the gravity of the offending behaviour, and to an extent and in a way that is just in all the circumstances.

From the Magna Carta we have the principle that we are ruled by the law and the law alone.

After sealing the Magna Carta in 1215, King John agreed that he could no longer throw someone in prison or torture anyone on a whim, or randomly punish them for an arbitrary reason.  Punishment could only be for a breach in the law, and nothing else. The punishment must also be fair and fit the crime committed. This meant that no one could be tortured just because they displeased the King.

Clause 39: No free man shall be seized or imprisoned, or stripped of his rights or possessions, or outlawed or exiled, or deprived of his standing in any other way except by the lawful judgement of his equals or by the law of the land.