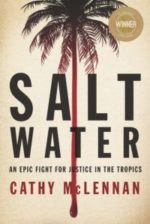 ‘Saltwater: an epic fight for justice in the tropics‘ is a novel written by Queensland magistrate Cathy McLennan.

McLennan was 22 years old when she started working as a solicitor for the Townsville and Districts Aboriginal and Torres Strait Islander Corporation for Legal Aid Services in the 1990s.

The novel fictionalises her time working in Townsville and on Palm Island.

Saltwater is a provoking account of the rule of law in action – or rather, missing in action – in some of Australia’s most marginalised communities. McLennan’s novel is all the more important for its being written by somebody with over 20 years’ experience working as a lawyer with Indigenous communities, but with no clean, simple, ‘silver bullet’ response to offer. The trauma described in the the novel reminds us of how complex it is to promote and uphold the rule of law, but also of the cost of not doing so. The frustrations of local magistrates, the lack of funding of important family services, the toxic legacy of the Stolen Generations, the anger of local communities, the constraints of the legal process, the struggles of law enforcement, and the personal choices of McLennan’s characters all combine to produce some appalling results.

Saltwater is a story that will – and should – frustrate and enrage anybody who thinks that the life and opportunities enjoyed by those at the top of Australian society should be available to those at the bottom too. Violence, crime, and substance abuse combine to destroy young lives in McLennan’s ‘tropical paradise’, and the damage runs through generations. Saltwater is the story of a broken community and the brave and openhearted people trying to help it. McLennan should be commended, however, for showing us that helping is not always as easy as we would like it to be.

The treatment of Indigenous children and young people in the criminal justice system has long been the subject of discussion at both a societal and government policy level within Australia. In Saltwater Cathy McLennan utilises the structure of a fictional crime novel, based on her own experiences, to draw attention to the past  and present injustices wrought on Indigenous children by poverty, physical and substance abuse and their subsequent interaction with lawyers, courts and social workers.

Hope can be found in McLennan’s resolute determination to promote change by shining light into the darkness of the real life outcomes for the Indigenous children and their families wrought by governmental decision and the criminal justice system. In her note from the author at the end of the book McLennan writes that the purpose of the book is to share the stories of those that have not had the opportunity to do so and be heard.

“Events like these are still happening – there are children, right now, suffering and offending, still with no real help, no solutions “

The belief that the law can solve societal ills is fundamental to our belief in a just and fair legal system – Saltwater may undermine this belief for some, but that acknowledging the reality of this may lead to change for the better.

Reading Saltwater has called us to consider to what extent the law can be a complete solution to social problems, and at a principled level how freedom to choose and the responsibility to protect people from harm is rarely easy or simple.

One of the Institute’s most popular education resources describes a High Court case, Maloney v the Queen [2013] HCA 28, that was a challenge to the alcohol restrictions on Palm Island under the Racial Discrimination Act 1975 (Cth). Despite a unanimous finding that these restrictions were racially discriminatory, the Court found they were special measures to protect the residents of Palm Island from the effects of the abuse of alcohol and associated violence. When speaking about this case in schools in Queensland and New South Wales, Jackie and I find that students’ reaction to the decision of the court is as polarised as the wider community’s.

Very few “sit on the fence” about this issue. Some feel that the alcohol restrictions are unfair and that the community on Palm Island should be free to choose their own path. Others see the restrictions as essential in protecting people from harm, and that this overrides all other considerations. Saltwater describes a reality where these two opposing positions are made infinitely more problematic by the complex nature of social disadvantage on Palm Island.