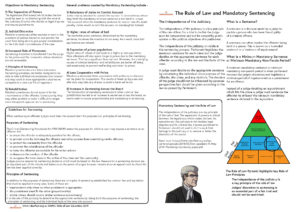 The independence of the judiciary is a key principle of the rule of law. For the right to a fair trial to be preserved, the judiciary need to be free to act according to the law, without influence from outside actors – such as parliament or the media. The introduction of mandatory sentences for criminal offences by parliaments threatens this independence.

What is a mandatory sentence?

Nicholas Cowdery AM QC on Principles of Sentencing

A paper about Mandatory Sentencing delivered at the University of Sydney Law School in 2014.

Independence of the Judiciary and Mandatory Sentencing

The Institute’s 2015 resource on the independence of the judiciary discusses the NSW offence Assault Causing Death.