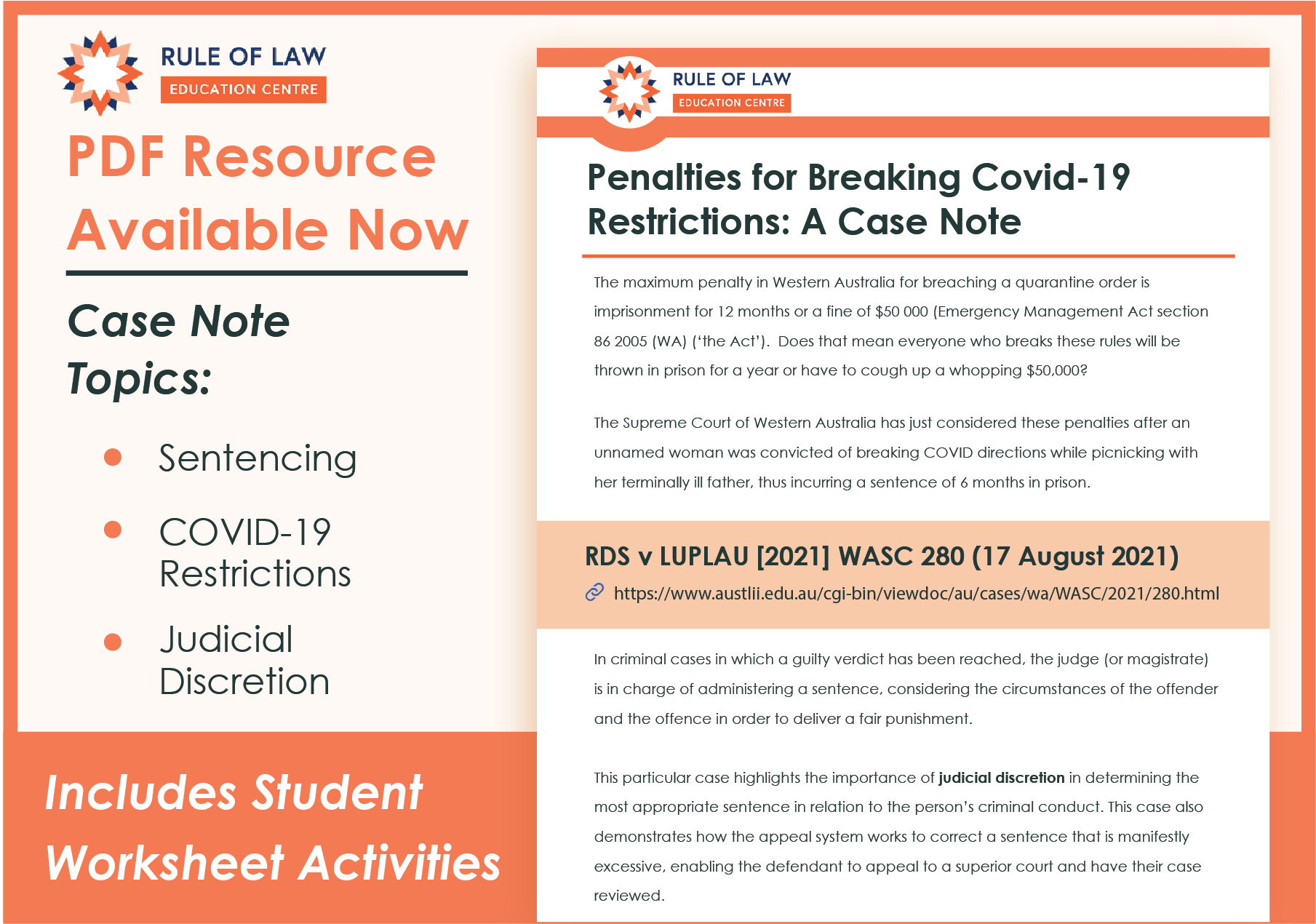 The maximum penalty in Western Australia for breaching a quarantine order is imprisonment for 12 months or a fine of $50 000 (Emergency Management Act section 86 2005 (WA) (‘the Act’). Does that mean everyone who breaks these rules will be thrown in prison for a year or have to cough up a whopping $50,000?

The Supreme Court of Western Australia has just considered these penalties after an unnamed woman was convicted of breaking COVID directions while picnicking with her terminally ill father, thus incurring a sentence of 6 months in prison.

In criminal cases in which a guilty verdict has been reached, the judge (or magistrate) is in charge of administering a sentence, considering the circumstances of the offender and the offence in order to deliver a fair punishment. This particular case highlights the importance of judicial discretion in determining the most appropriate sentence in relation to the person’s criminal conduct. This case also demonstrates how the appeal system works to correct a sentence that is manifestly excessive, enabling the defendant to appeal to a superior court and have their case reviewed.

The facts of the case RDS v Luplau [2021] WASC 280 (‘RDS v Luplau’) are detailed in paragraphs 1-2 of the official judgement of appeal and are summarised below:

Under the Act, the maximum penalty for failing to comply with the direction is imprisonment for 12 months or a fine of $50,000

The penalty of one year imprisonment for breaching quarantine orders was only inserted into the legislation in April 2020 via the Emergency Management Amendment (COVID-19 Response) Bill 2020. The Explanatory Memorandum states: ‘The strengthening of the penalty provision aims to improve compliance with directions … during an emergency and to provide more options to pursue where people breach directions issued under the emergency management provisions.’

It is crucial that our judicial system ensures ‘proportionate punishment’- that is the punishment must fit the crime. Clause 21 of the Magna Carta, the foundation of the Rule of Law, states that ‘no free person is to be punished for a small offence except in proportion to the nature of the offence’.

While the woman was in breach of the law, she did so with the intent of compassion for her dying father, and she took the precautions of gaining approval to cross the state border to visit him in hospital. However, none of these factors concern the legislation she breached – under this Act, the woman may as well have just come off an international cruise ship and gone to different nightclubs around Perth or had a fun day out with a friend, breaking the law for purely selfish reasons while incurring the same penalty.

This is where a judge’s discretion makes all the difference in determining the punishment that each individual truly deserves. By assessing aggravating and mitigating factors in addition to the legislation breached, judicial discretion ensures punishment is in proportion to the crime.

His Honour made the below comments regarding the Magistrate’s sentence:

‘The learned magistrate accepted that the appellant had been provided with advice by the Hospital that she was able to visit her dying father in palliative care but that due to him being transferred to the Second Hospital, she was unable to visit. The learned magistrate accepted that the health of the appellant’s partner and father meant ‘it must have been a terrible time’. Her Honour gave a 25% discount for the plea of guilty at the first reasonable
opportunity.’ [See 31].

A suspended sentence of imprisonment is where the offender remains living in the community on the condition that they do not commit a further offence.

Appeal to the Supreme Court

‘Ground 1: The imposition of a term of 6 months and 1 day imprisonment suspended for 12 months was manifestly excessive particularly having regard to the place the offending occupied on the scale of seriousness and the personal circumstances of the appellant.’

Regarding the WA Sentencing Act, His Honour stated:

‘Pursuant to s 6(4) of the Sentencing Act a court must not impose a sentence of imprisonment on an offender unless it decides that the seriousness of the offence is such that only imprisonment can be justified or that the protection of the community requires it.’ [See 58].

After considering the personal circumstances of the appellant, His Honour stated:

‘The learned magistrate found that personal deterrence was an important sentencing consideration in respect of the appellant. In my respectful view that was not a factor that warranted any weight in the circumstances of this case. Clearly, the learned magistrate erred in making that finding. That erroneous finding provides support for the view that the sentence imposed was excessive.’ [See 67].

‘Ground 2: The sentencing Magistrate erred in law by finding the fact that the appellant lied to Police during an interview was an aggravating factor.’ [See 34].

Is it an aggravating factor if you originally lie to the police but then, after being shown evidence, you admit your guilt?

In considering whether the original lie was an aggravating factor, His Honour stated:

‘In the context of offending under the Emergency Management Act, lying to the police who are investigating a possible contravention of a direction may constitute an aggravating factor. It is important that persons who have contravened a direction concerning quarantine provide truthful answers to the police so that possible contacts are traced, and the likelihood of any infections are identified and contained.’ [See 50].

In the present case the appellant contravened the Emergency Management Act and did not provide honest answers to the investigating officers when first asked. However, within minutes of denying the allegation, and in the course of the interview, the appellant gave an honest account of her offending and accepted responsibility.’ [See 51].

‘In those circumstances, I find that the learned magistrate did err in finding that the answers given by the appellant during the interview constituted an aggravating factor. Not infrequently, offenders give varying accounts of their behaviour during a police interview. If, ultimately, an offender admits the offending and thereby accepts responsibility it is difficult to find that answers denying the offending given earlier in the same interview could properly be characterised as an aggravating factor.’ [See 51].

‘If an offender denies the offending in the course of an interview with the police that may be considered a relevant factor in determining whether the offender is remorseful. During the interview with the police the appellant admitted her offending and accepted responsibility and then pleaded guilty at the first reasonable opportunity. I find that the proper characterisation of the appellant’s conduct during the interview and her plea of guilty is that it demonstrated her remorse. That is a mitigating factor and not an aggravating factor.’ [See 52].

On 17 August 2021, the appellant succeeded in her appeal, as His Honour found the woman was of good character, had no criminal record and committed the breach in ‘the most extenuating of circumstances’. It was upheld that the previous sentence of imprisonment was ‘manifestly excessive’, and accordingly, her sentence was reduced to a fine of $1000 and a spent conviction.

A spent conviction means that it will not be recorded, and she will not have a criminal conviction on her record.

1. Why is the penalty for breaching a quarantine order so harsh?

2. What factors did His Honour take into account when making his sentencing decision? 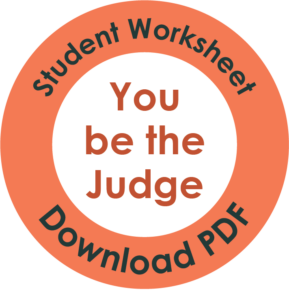