On Tuesday 13th December 2022, a financial settlement was made between Brittany Higgins and the federal government based upon her claims she was not supported by Senator Reynolds or Michaelia Cash after the alleged sexual assault by Bruce Lehrmann.

The Australian newspaper reported on 15 December 2022 that:  “The Albanese government muzzled former Liberal minister Linda Reynolds in her defence against Brittany Higgins’ multimillion-dollar lawsuit, threatening to tear up an agreement to pay her legal fees and any costs awarded unless she agreed not to attend a mediation. … Senator Reynolds was therefore unable to dispute any of Ms Higgins’ allegations about a failure to support her or properly investigate the incident, some of which were contested at Mr Lehrmann’s trial.”

In response, Chris Merritt, Vice President of the Rule of Law Institute of Australia has written: ‘It is difficult to see how the Higgins settlement complies with the longstanding rules governing the way the federal government is supposed to deal with monetary claims (ie the Legal Services Directions). It is also difficult to see how those responsible for this settlement could not perceive that outlaying taxpayers’ money in breach of those rules might trigger the interest of regulators – including the National Anti-Corruption Commission.” 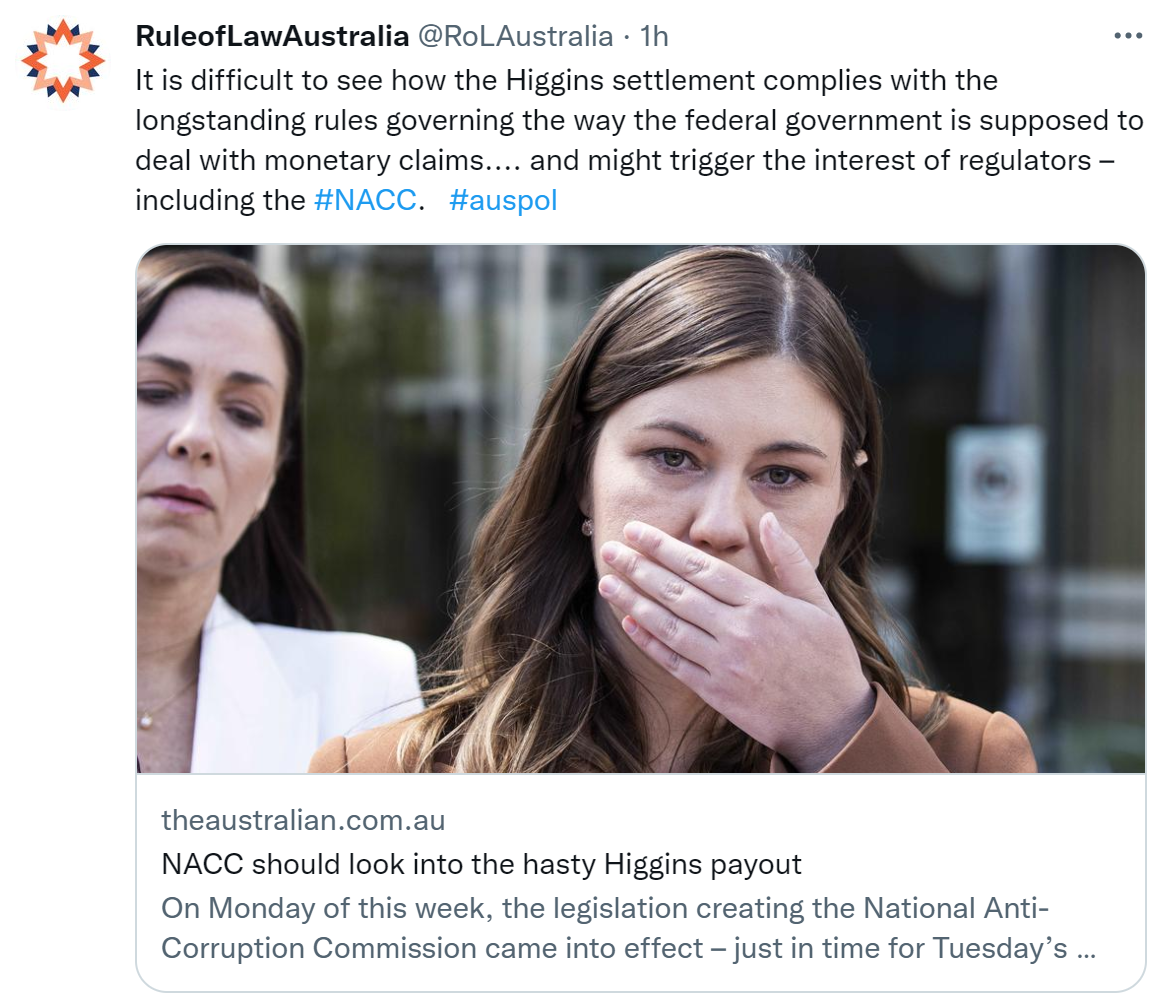 These Directions provide a framework for the conduct of the Commonwealth’s legal affairs to ensure transparency and accountability. They enable the Attorney General to ‘protect the legal interest in the Commonwealth in relation to the delivery of legal services.’ (Explanatory Memorandum, Judiciary Amendment Bill 1998 (Cth), 8.)

Appendix C- Handling Monetary Claims of the Legal Services Directions 2017 outline the policy concerning the handling of monetary claims against the Commonwealth and contains the following clauses:

2. Monetary claims covered by this policy are to be settled in accordance with legal principle and practice, whatever the amount of the claim or proposed settlement. A settlement on the basis of legal principle and practice requires the existence of at least a meaningful prospect of liability being established. In particular, settlement is not to be effected merely because of the cost of defending what is clearly a spurious claim. If there is a meaningful prospect of liability, the factors to be taken into account in assessing a fair settlement amount include:

(a)  the prospects of the claim succeeding in court

(b)  the costs of continuing to defend or pursue the claim, and

(c)  any prejudice to Government in continuing to defend or pursue the claim (eg a risk of disclosing confidential government information).

4. Major claims may only be settled if:

(a)  written advice is received from AGS or a legal adviser external to the entity that the settlement is in accordance with legal principle and practice, and

(b)  the accountable authority (or delegate) agrees with the settlement.

5.  If a non‑corporate Commonwealth entity considers that a claim raises exceptional circumstances which justify a departure from the normal mechanism for settling a claim, it is to refer the matter to OLSC. The Attorney‑General may permit a departure from the normal policy, but may impose different or additional conditions as the basis for doing so.

In his article, Chris Merritt outlined that if Reynolds was prevented from testing the allegations against her and if this hobbled the ability of government officials to properly defend the public finances of the Commonwealth of Australia, then “the issue that needs to be resolved is whether this undermined the ability of government officials to discharge their duty under Appendix C of the Legal Services Directions to deal with the Higgins claim in accordance with legal principle and practice.”

The two major questions regarding the Higgins settlement in respect of the Legal Services Directions are:

1. Was the claim settled in accords with section 4 for Major Claims?

“The Legal Services Directions state that the government needed to obtain a legal opinion that the settlement is in accord with legal principle and practice. (section 4(a))

So does such an opinion exist? If it does, who wrote it and how did the author conclude – based on facts that were not properly tested – that the Higgins claim had a meaningful prospect of success in a court of law?

If no lawyer was willing to provide such an opinion, the rules have a loophole that would still permit a payout – but only if there had been direct involvement by the Attorney-General. (section 5)

First there would need to be a declaration that the Higgins mediation involved “exceptional circumstances” and Dreyfus would then need to agree that the normal criteria for settlements should not apply in this particular case.

So somewhere in the bureaucracy there is either a legal opinion by a courageous lawyer who drew upon untested claims, or a document in which Dreyfus states that the normal rules should not apply to Higgins.”

2. Was there a meaningful prospect of liability being established?

In his article titled ‘The Model Litigant Principle: Can the AGS stay competitive’, Barry Leader wrote:

“the community expects the Commonwealth to deal properly with taxpayers’ money and, in particular, not to spend it without due cause and due process. Not all demands made on the Commonwealth should be met. The Commonwealth is also expected to act consistently in its handling of claims. …

Clearly, the model litigant principle requires fairness. Conversely, it does not preclude firmness – taxpayers’ money should not be expended improperly, and the Commonwealth’s legitimate interests should be protected…

This concept of firmness is included within the Legal Services directions that state a settlement based on legal principle and practice “requires the existence of at least a meaningful prospect of liability being established” against the Commonwealth.

In his article, Chris Merritt then concludes “what needs to be resolved is whether the exclusion of Reynolds from the mediation left the officials running that process with a misleading impression of the strength of Higgins’ case. Did the financial coercion against Reynolds adversely affect the ability of those officials to defend the financial interests of the Commonwealth?.

These matters can only be decided by an independent investigation – preferably in private.“

The NACC legislation defines corruption as a breach of public trust, abuse of office or any conduct that could adversely affect the honest or impartial exercise of a public official’s powers or duties.

(1) Each of the following is corrupt conduct:

(b) any conduct of a public official that constitutes or involves a breach of public trust;

The explanatory memorandum for the bill says corrupt conduct must be capable of adversely affecting the probity of a public official’s conduct and not merely its efficacy.

In the case of the Higgins settlement, the handing out of public money may be considered as falling under the definition of corrupt conduct where “persons unknown decided to use their control of public money to ensure the officials running the mediation were presented with an incomplete version of reality that had not been thoroughly tested.”