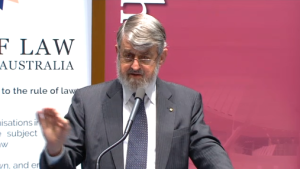 Nicholas Cowdery AM QC*, former NSW Director of Public Prosecutions, has called for the Independent Commission Against Corruption (ICAC) to be confined to its investigative role and leave ‘prosecution to the experts.’

Mr Cowdery pointed to the importance of a separation between the investigator and the prosecutor:

“Our criminal justice system is founded upon a strict division between the powers of investigation and of prosecution and for very good reasons.”

The ICAC unearths information about corruption and this “necessarily shapes their views, attitudes, approaches and decisions,” of a prosecution.

However, a prosecutor should come to a decision whether to prosecute:

“independently of any political policy objective or personal stake and is constrained by the criminal law, the prosecution guidelines, the provable facts and the requirement that any evidence relied upon be legally admissible in a court.”

Admissibility of evidence is a key issue with ICAC prosecutions given their powers go beyond those of police and other investigatory bodies.

The referral of prosecutions by the ICAC can have a “serious effect on reputation and the finances and wellbeing of that person and others. The DPP should have that task.”

*Nicholas Cowdery AM QC is a former NSW Director of Public Prosecutions, and member of the Rule of Law Institute’s Governing Committee.

Welcome to the National Civics Curriculum