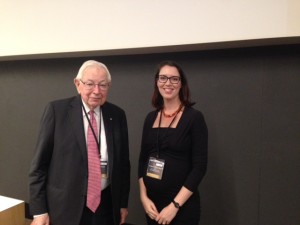 The recent Judicial Independence in Australia Conference at the TC Beirne School of Law, sponsored by the Magna Carta Committee of the Rule of Law Institute of Australia on the 10 -11 July 2015 was a resounding success. Former Chief Justice of the High Court of Australia the Honourable Sir Anthony Mason gave the keynote address. A selection of his thoughts on judicial independence, it’s history, definition and the importance of collaboration in multi-member courts  can be found below.   Sir Anthony began with discussing the origins of judicial independence.

He then went on to talk about multi-member courts and retaining judicial independence for individual judges.

Former High Court Justice The Hon Dyson Heydon identifies the concept of the “enemy within” in his speech Threats to Judicial Independence ‘The Enemy Within’, he speaks of a dominating judge impacting on judicial independence. Sir Anthony pointed out that in this context there need be two conditions for  judicial independence to be under threat, a dominating judge and “sheep-like” colleagues who accept the view of the dominating judge. Intellectual leadership does not threaten judicial independence. When we look for new judges, we should only have candidates who are known for their independence. Collaboration in the production of judgments is favoured by Sir Anthony but needs to work alongside the right of the individual judges to hold their own views and express them. Dissenting judges have a responsibility to outline why they are dissenting when they write an individual  judgement. Collective judgments can be problematic as it is hard to know who contributed what to the judgement. However, when the judgement contains the provision of a statement that all judges have contributed to the judgment, in the experience of Sir Anthony there is true collaboration.

In the future Sir Anthony feels that”Maybe we need to have a redefinition of judicial power” to include judges making public statements about legal issues and being able to exercise their independence for the benefit of the law and the people.