Jury Trials and ‘the exclusionary rule’

“Finality is a good thing, but justice is a better” per Lord Atkin in Ras Behari Lal v King-Emperor (1933) Privy Council decision.

The High Court in its decision dated 12 February 2014, Smith v the State of Western Australia 2014 HCA3 found that a jury verdict of guilty should be set aside because a note left in the jury room which was found after the jury had been discharged suggested that one of the jurors had been intimidated into agreeing with the others to find the accused guilty.

The High Court’s decision overturned the Western Australian Court of Appeal’s decision in the same matter, and ordered the Court of Appeal to re-consider its previous decision to dismiss the appeal based on its application of the “exclusionary rule”. That rule states that “the Court does not admit evidence of the a juryman as to what took place in the jury room, either by way of explanation of the grounds upon which the verdict was given, or by way of statement as to what he believed its effect to be”. ( Ellis v Deheer [1922] 2 KB 113) It has been used in the past to prevent any inquiry into the jury’s discussion process that occurs in the jury room, but allowing evidence of what jurors have done outside the jury room, such as their own internet investigation of the crime or the accused to overturn the jury’s verdict. The rationale for the exclusionary rule is that the jury’s decision made when they are altogether should be final and their discussions confidential.

Weighing the two principles of finality and justice, the High Court said that to disregard “evidence capable of belief which gives rise to reasonable ground for suspicion that one juror has exercised unlawful intimidation over another” would “cast a shadow of injustice over the verdict” and “the institutional integrity of the system of justice”. The Western Australian Criminal Code specifies that it is a crime to attempt to influence a juror by threats or intimidation.

The decision is a strong affirmation of the underlying rule of law principle that trials should be fair and conducted in accordance with legal principles including the manner in which jurors behave. Just as legal professional privilege cannot be used to hide evidence of unlawful conduct, the principle that the jury’s decision is final cannot be used to ignore evidence of unlawful intimidation. As the High Court said, ‘in the case of each rule, the strong considerations of public policy which justify preserving the secrecy of communications associated with the administration of justice may not be invoked to throw a protective cloak of secrecy over criminal conduct”. 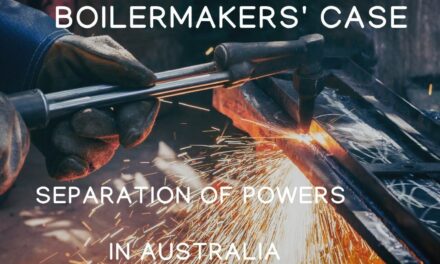 The Boilermakers’ case: the separation of powers in Australia