On 18 June 2014, the High Court handed down its decision concerning the lawfulness of amendments to the Migration Act 1958 (Cth) legislation enabling asylum seekers to be removed to Manus Island, part of Papua New Guinea (PNG), for “processing” to assess whether they meet the definition of refugees and can be granted a protection visa. The High Court held that the legislation is valid, notwithstanding its harshness. In doing so, it reiterated that even though laws may breach international treaties and human rights concerns, they will not be struck down by the courts if they are constitutionally valid. The decision demonstrates one of the tensions in rule of law theory: whether the rule of law requires not just that laws are validly made but that they satisfy human rights principles.

The background to the changes to the Migration Act that were considered in the case was the High Court’s August 2011 decision in Plaintiff M70/2011 v Minister for Immigration and Citizenship (‘Malaysia Declaration Case’) [2011] HCA 32 (summary), which struck down the previous government’s ‘Malaysia solution’ asylum seeker policy. In that case, the Court found that the federal government had sought to circumnavigate its international obligations under the international Refugee Conventions, by declaring Malaysia to be a place that conformed with its Refugee Convention obligations, and thus a place to which the federal government could transfer asylum seekers who arrived by sea (known in the Act as ‘unauthorised maritime arrivals’). The declaration was declared invalid by a 6-1 majority of the High Court because Malaysia is not a party to the Refugees Convention or its Protocol and is not bound by international law or its own law to provide procedures and protection for people seeking refugee status.

The Manus Island amendments allowing for offshore processing are differently expressed to the ‘Malaysia Solution” amendments which were struck down. They are contained in subdivisions A and B of Division 8.

Key elements of the new statutory regime include:

As highlighted by the High Court, the legislation makes no reference to what occurs with asylum seekers following their removal from Australia to a regional processing country. It contains no provisions dealing with their custody or detention of  unauthorised maritime arrivals the processing of their claims to refugee status.

PNG was designated to be a regional processing country by the Minister on 9 October 2012. On July of 2013, the Minister gave a written direction that officers take asylum seekers covered by the amendments to PNG.

The plaintiff in this case was brought by an Iranian national, who arrived on the shores of Christmas Island in July of 2013, seeking asylum in Australia on the basis of religious persecution. He was sent to Manus Island, and told his refugee claim would not be processed in Australia.

The key questions to be determined by the Court related to:

1. Are the laws Constitutional?

The Court was asked whether the provisions fell within the relevant section of the Constitution, being s51(xix) of the Constitution whereby the Commonwealth Parliament may make laws “with respect to” aliens. Previous High Court authority holds that laws providing for the expulsion or deportation from Australia of non-citizens without a visa are laws made under this power (Chu Kheng Lim v Minister for Immigration [1992] HCA 64; Al-Kateb v Godwin (2004) 219 CLR 562), as they operate directly upon aliens.

The plaintiff argued that this test is insufficient to determine the Constitutional validity of the legislation. He argued that in order to be supported by s51(xix), the law must satisfy a test of proportionality, namely that “proportionality may inform the question of whether a sufficient connection with a head of power exists in the first place.” He argued that the statutory scheme introduced by this legislation is “so extreme in its operation”, that it is not reasonably appropriate and adapted to the Constitutional head of power.

However, the Court was of the view that this test of proportionality was insufficient identified and defined by the plaintiff. Thus, the laws were held to be within power.

2. Is the decision to designate PNG valid?

The Court then considered whether the Minister’s decision to designate PNG as a regional processing country was valid. The plaintiff contended that considerations should be implied into the legislation that the Minister was obliged to take into account. These include: Australia’s international law obligations; the need to consult with the Office of the United Nations High Commissioner for Refugees prior to designation; PNG’s international obligations and its domestic law; PNG’s capacity to implement its obligations; the framework, if any, for processing refugee claims in PNG; the possibility of indefinite detention; and the conditions in which asylum seekers would be detained.

The Court held that s198AB does not require consideration of these factors. Instead the legislation is clear that the Minister only needs to form an opinion that designating a country as a regional processing country is in the national interest. The Court distinguished the judgment of Mason J in Peko-Wallsend (1986) 162 CLR 24 finding that the Minister has no obligation under this legislation to have regard to any factors other than the national interest, as the drafting of the legislation makes this the singular condition for designation – with a general discretion to have regard to other matters. Thus, the Court explicitly held that this legislation does not oblige the Minister to ensure that PNG would “fulfil its assurances and promote the maintenance of a program that was fair”.

Most interestingly, the Court then reflected on its reasoning in an earlier decision, Plaintiff M61/2010E v The Commonwealth (Offshore Processing Case) (2010) 243 CLR 319, which was cited in the Malaysia Declaration Case. In the earlier case, the Court stated that the Migration Act was a set of statutory provisions ‘directed to the purpose of responding to international obligations which Australia has undertaken in the Refugees Convention and the Refugees Protocol’, and provides the power to relevant institutions to respond to those obligations by granting protection visas in appropriate cases. In this case, the Court curtly stated that ‘there may be some doubt whether [the amendments], which were inserted after these cases, can be said to respond to Australia’s international obligations under the Refugees Convention’. However, it did not find that any further conditions relating to Australia’s international obligations were to be implied into the legislation.

The policy of offshore processing on Manus Island has been controversial, and the subject of much public debate. Following riots and serious allegations of abuse against detainees, questions have arisen as to whether Australia is in breach of its human rights obligations.

The High Court has confirmed in this case that, regardless of the merits of the offshore processing regime in terms of human rights, it cannot overrule statute that is constitutionally valid – whether or not it is in breach of international treaties and human rights concerns. Unless the Refugee Convention and the Universal Declaration of Human Rights are incorporated into Australian domestic law, statutes that breach human rights obligations will not be struck down by the courts.

Read the full judgement of this case: Plaintiff S156-2013 v Minister for Immigration and Border Protection [2014] HCA 22 or the judgment summary.

Case note by Mikah Pajaczkowska-Russell, legal intern with RoLIA. Join the discussion about rule of law issues on Twitter @RoLAustralia. 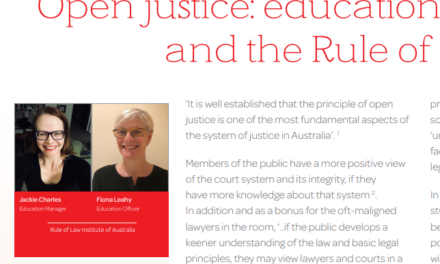