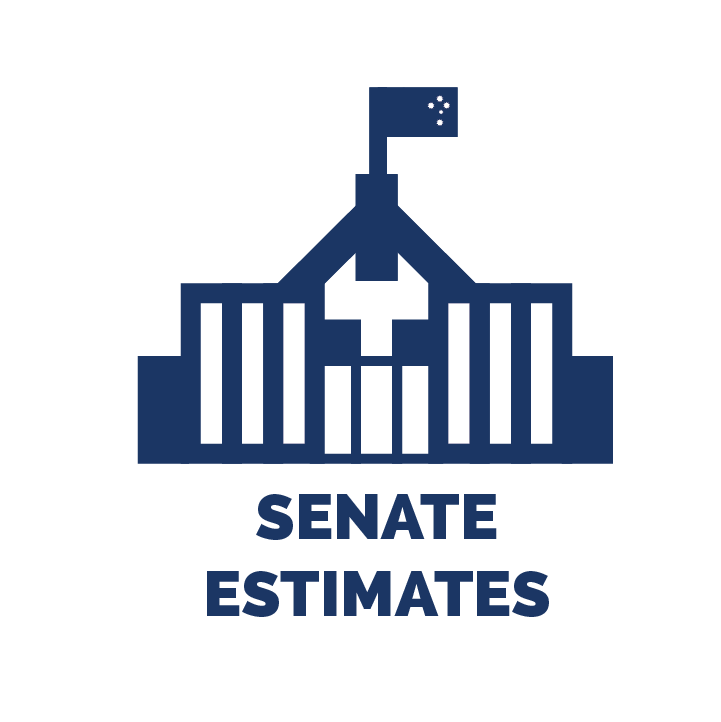 RoLIA’s eighth review of responses to questions on notice at Senate estimates hearings provided by government departments and agencies within the Commonwealth Treasury Portfolio again demonstrates a disregard for accountability and compliance with Parliamentary requirements.

And, yet again, the Australian Securities and Investments Commission (ASIC), whose performance investigating rogue financial advisors and poor banking practices was heavily criticised in a recent Senate inquiry, is a leading offender.

Read RoLIA’s report of its Senate Estimates Survey No. 8 to find out more.

Senate estimates hearings provide an opportunity for Senate committees, and through them the public, to scrutinise how the government has spent, and plans to spend, public money. Generally, each Senate committee will conduct three estimates hearings per year on those departments and agencies within its jurisdiction. The first round will be conducted after the tabling of the Portfolio Budget Statements in the Senate in May. Supplementary hearings are often conducted in October/November, and the third round of hearings occurs after the Portfolio Additional Estimates Statements are tabled in February the following year.

Senator John Faulkner has called estimates hearings “the most effective mechanism for parliamentary accountability that we have in our system of government,” while former Inspector-General of Intelligence and Security, Bill Blick, has said the hearings are “an important symbolic expression of the role of Parliament in holding the executive accountable.”

Under Senate Standing Order 26 (5), Senators are entitled to “ask for explanations from ministers in the Senate, or officers [of the department or agency], relating to the items of proposed expenditure.” If the minister or officer is not able to answer the question during the hearing, he or she may take it ‘on notice.’ Written answers to questions on notice must be supplied by a due date specified by the committee. Under Senate Standing Order 74 (5), if an answer has not been supplied within 30 days of that due date, the Senator asking the question may request the relevant minister to provide an explanation, and if no explanation is forthcoming, may move a motion in the Senate to take notice of the failure to provide such an explanation.

This survey analyses the response time of agencies within the Treasury Portfolio to questions on notice asked by the Senate Economics Committee at their additional estimates hearings on 26 and 27 February this year. The due date for written answers to these questions was 24 April. As a result, Senators were entitled to invoke Standing Order 74 (5) after 24 May.

Results[pl_blockquote pull=”right” cite=”Senate Estimates Survey No.8″]”…given the criminal sanctions that often attach to an ordinary person’s failure to comply with regulatory bodies’ deadlines. A fundamental aspect of the rule of law is that government bodies ought not to be judged by a different set of standards than the people whom they are supposed to serve.”[/pl_blockquote]

Of the 3301 questions on notice asked in this round of estimates hearings:

Previous RoLIA surveys have noted the poor performance of many agencies within the Treasury Portfolio in responding to questions on notice within the required timeframe. For this round of hearings, fewer than 1 in 10 questions were answered on time, while nearly half the questions were answered more than 30 days after the specified due date. In fact, the Australian Taxation Office was the only agency that responded to the committee’s questions before the 24 April deadline, answering all their 231 questions on time. No other agency managed to meet the deadline for even a single question.

This poor response rate raises questions about the suitability of the 30-day rule. It would not be the first time such questions have been raised. In 2002, just five years after the rule was incorporated into the standing orders, the Senate Procedure Committee raised the possibility of extending the deadline – which at that time did not apply to estimates hearings – to 60 days, since many questions appeared to require more than 30 days to prepare an adequate response, and senators seemed rarely to invoke their powers under Standing Order 74 (5) until 60 days had passed anyway. The extension did not come to pass, and the 30-day rule was extended to estimates hearings in 2005.

Given the Senate’s embrace of the rule, it seems odd that there should be so little sanction attached to the failures of regulatory bodies to comply with the deadlines. This is particularly so, given the criminal sanctions that often attach to an ordinary person’s failure to comply with regulatory bodies’ deadlines. A fundamental aspect of the rule of law is that government bodies ought not to be judged by a different set of standards than the people whom they are supposed to serve.

Previous RoLIA surveys have often also encountered questions that remain unanswered at the time of the writing of the survey, which can be up to five months after the relevant round of estimates hearings. Considering the important role these hearings play in ensuring government accountability, and the important role government accountability plays in upholding the rule of law, these failures are concerning. Of the committee’s 156 still-unanswered questions, 97 were directed to ASIC, 25 to the Corporate Services Group within Treasury, and 11 to the Australian Accounting Standards Board.

For example, on 20 December last year, ASIC issued a media release saying that, as a result of the Federal Government’s stated intention to repeal certain provisions of the Future of Financial Advice (FOFA) legislation, enforcement action would not be taken for alleged breaches of those provisions. This release led to a heated exchange between Senator Sam Dastyari and officers from ASIC during the additional estimates hearing on 26 February, where the Senator asked ASIC if they had not just given a “green light” for financial advisors to ignore FOFA, despite the fact that it was still “the law as it currently stands.” ASIC responded that this was consistent with their approach to other legislative changes in the past, and that while “deliberate and egregious breaches” would still attract enforcement action, their key objectives were to “provide some certainty to people in the marketplace,” and “focus our enforcement resources on those areas where consumers are actually being harmed and are at significant risk.”

After this exchange, Senator Penny Wong, a participating (non-voting) member of the Economics committee who had been absent from the ASIC hearing, lodged a written question on 6 March (see, Questions 1596-99), asking, amongst other things:

At the time of writing, more than five months after the question was lodged, it remains unanswered.

The situation was complicated further by the Government’s announcement on 24 March that any FOFA changes would be postponed to allow the Economics committee to conduct a public consultation on the legislation. Given that the government’s position on the final form of the FOFA legislation was again open, it was not clear, according to Senator Dastyari at a hearing of the Parliamentary Joint Committee on Corporations and Financial Services on 28 March, precisely which provisions of the FOFA legislation were the subject of ASIC’s non-enforcement undertaking. As the Senator asked ASIC officers at that hearing, “what is it that you are not enforcing?” ASIC did not provide a clear response during the hearing, and did not clarify their position subsequently. In the end, the FOFA regulations were amended on 30 June, making the issue less pressing.

RoLIA acknowledges that this is a complex area, and ASIC’s goals of providing certainty to the financial sector, and not requiring expensive, time-consuming compliance with technical regulations that are subsequently amended, are commendable. However, the point remains that between 20 December last year and 30 June this year, an independent statutory authority decided not to enforce certain laws that had been properly passed by the Australian Parliament, and between 24 March and 30 June, it was by no means clear which laws they were not enforcing. Moreover, for more than five months, ASIC simply ignored a question from a Member of Parliament that sought an important clarification and explanation of ASIC’s actions. This is a dangerous road to travel. Although ASIC may operate independent of political control, it ought not to operate independent of the rule of law.

By way of contrast, ASIC, losing 12 percent of its staff this coming financial year, facing a budget cut of more than $120 million over the next five years, and still under heavy criticism for its performance, might be forgiven for failing to respond to Senator Joe Ludwig’s questions about how many of its officers are responsible for preparing the Minister’s briefing pack for Question Time, or to requests for a breakdown of this time by hour and by APS classification of each officer (see, Questions 289-93). This is particularly so, given that the same questionswere directed not just to ASIC and some specific allegation of misuse of public resources, but were asked indiscriminately of every agency within the Treasury Portfolio that appeared before the committee in this round of hearings (see, for example, Questions 118-22, 430-34, 571-75, 712-16, and so on). Although the Senate has consistently reiterated the need for compliance with parliamentary rules and regulations, not all breaches are as important as others. Concern to protect the rule of law ought not to descend into nit-picking.

The Urgent Need to Enhance Accountability

Given these continuing failures to respond to questions about important public issues, there is an urgent need to address the ongoing lack of compliance with the Senate estimates process by government departments and agencies.

The Senate estimates process is one of the most critical elements of the checks and balances between the legislative and executive arms of government. The hearing transcripts and written responses to questions on notice from estimates hearings are also a significant indicator that government departments and agencies are transparent and accountable in their operation.

Since government regulators are independent agencies with extensive powers and responsibilities in administering the law in Australia, monitoring and analysingestimates hearings provides key indicators as to their accountability. RoLIA’s survey of responses to questions taken on notice by Government agencies promotes awareness of the rule of law in government.

The estimates process provides the major opportunity for the Senate to assess the performance of the public service and its administration of government policy and programs… Its effect is cumulative, in that an individual question may not have any significant impact, but the sum of questions and the process as a whole, as it has developed, help to keep executive government accountable and place a great deal of information on the public record on which judgments may be based. 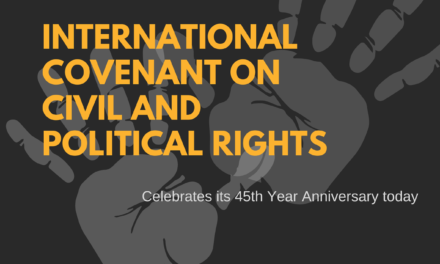 ICCPR and Human Rights in Australia