The Federal Election and the Registration of Political Parties

1.       Many, if not all, of the readers of this article will vote at the upcoming federal election, or will soon be entitled to vote at subsequent elections. Voting is without question an important part of the democratic process in Australia. Voters will either vote for a political party, or an independent.

2.       In Australia two political parties, the Liberal Party of Australia and the Australian Labor Party dominate politics at all three levels of government. There has been a growing concern by these two parties about the loss of votes to minor parties and independents.

3.       Political parties in Australia must be registered under the Australian Electoral Commission Act 1918, so that they can be recorded on ballot papers. But what happens when the names of two political parties are similar? Prior to September 2021 any disputes about the similarity of names of political parties was determined by the independent Australian Electoral Commission, which has an enviable reputation among democratic countries. In 2007-8 the Liberal Party made an objection to the AEC about the registration of the Liberal Democratic Party and its abbreviation, Liberal Democrats. The AEC rejected the Liberal Party’s objection which decision was upheld on internal review. The Liberal Party did not lodge an appeal with the Administrative Appeals Tribunal, which it was entitled to do.

4.       In late 2021 Members of Australian Parliament representing the Liberal Party and Labour Party combined to amend the Act to in effect require the AEC to deregister any political party with a name that containing the words Liberal or Labor/Labour, unless the name of the political party was changed to remove Liberal or Labor from its name within 30 days. The Liberal Party then requested the AEC to deregister the Liberal Democratic Party if it did not change its name.

5.       It may be thought of as somewhat unseemly for the two major political parties in Australia to use the Federal Parliament to pass laws to each of their advantage and to the detriment of minor parties, who nowhere near have sufficient votes to contend with both major parties acting together. The effect of these new laws is to give the Liberal Party a monopoly over the word Liberal, and to give the Labor Party a monopoly over the word Labor/Labour.

6.       In respect to the use of the word Liberal, this is particularly odd. The word ‘liberal’ has a variety of different meanings, depending on the place and the time. In the early 1800s it meant not strict or rigorous. Today in the United States a liberal is a person who believes that government should be active in supporting social and political change.

8.       Sections 7 and 24 of the Constitution provide that Senators and members of the House of Representatives are to be directly chosen by the people of the Commonwealth. In other words ‘rule by the people’. Accordingly the people must be given a true choice with an opportunity to gain an appreciation of the available alternatives. These sections of the Constitution are also the basis for the principle of ‘freedom of political communication’ developed by the High Court over the last 30 years.

9.       The Commonwealth defended the proceedings in the High Court. Its argument was that the law removed voter confusion. The answer to this point was that the AEC had already determined that question under the existing laws.

10.   The Liberal Democrats were unsuccessful. Three judges found the laws to be invalid, four judges said they were valid. The narrowest of margins possible in the High Court. According to the majority of judges, the requirement of direct choice by the people was intended only as a basic structural requirement or the bare foundations of the electoral law. This deliberate design of the Constitution included leaving Federal Parliament with a wide leeway of choice, even concerning the fundamental features of the operation of elections. In circumstances where the major political parties can band together to pass such a law to their own benefit, to create a monopoly over their names, it is an argument with which many of us may disagree.

-Malcolm Stewart, Managing Director of Speed and Stracey Lawyers and Senior Vice President of the Rule of Law Education Centre

Note: the writer’s firm acted for John Ruddick, who represented the Liberal Democratic Party, in this matter 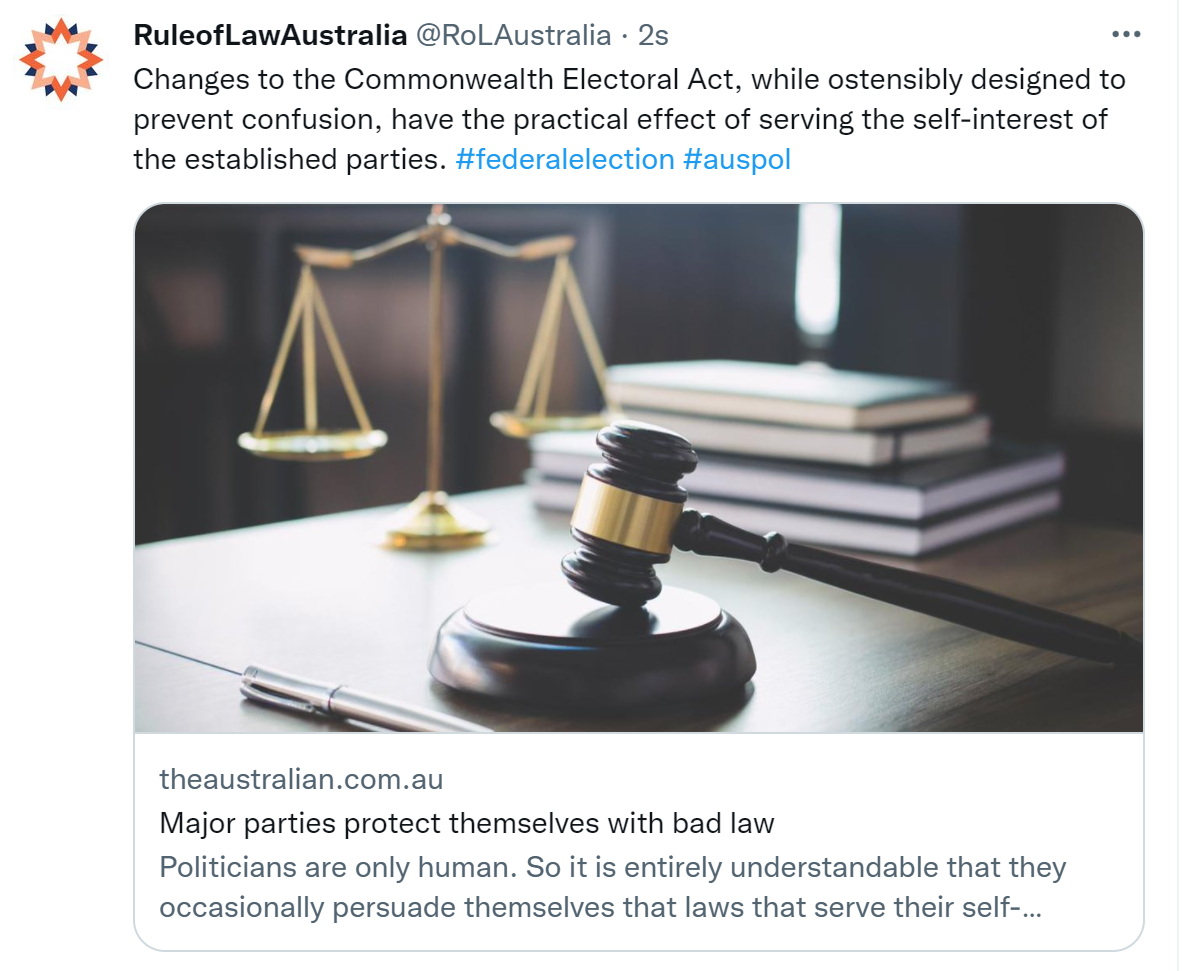 Chris Merritt in the Australian on 31 March 2022 wrote

“The logic of banning political names might look like a solution to the donkey vote, but it’s not. The report of the joint select committee on electoral matters says the Labor vote is impaired whenever the Democratic Labor Party is listed higher on the ballot paper. The report says the same applies when the Liberal Democratic Party is listed higher on the ballot paper than the Liberals. This, according to the dissenting joint judgment of Chief Justice Susan Kiefel and Justice Patrick Keane, means that the problem arises not from a party’s name but from the location of that name on the ballot paper.

The major parties have taken aim, hit the wrong target, served their self-interest and encouraged voters to hold their noses on polling day.”