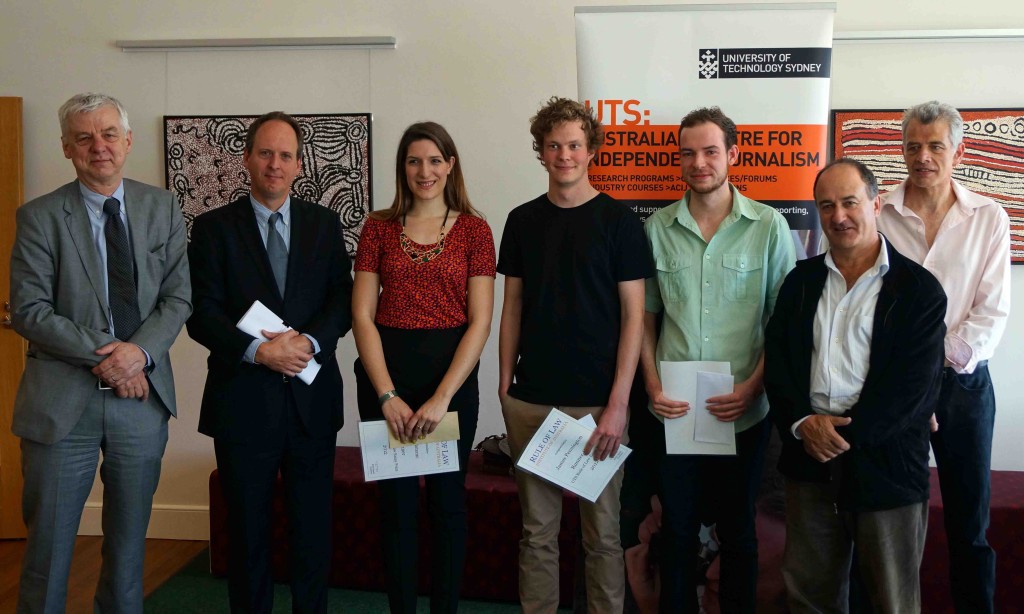 RoLIA awarded three students from the University of Technology, Sydney, with prizes for their essays on the rule of law and regulation of the media. The Dean of the Faculty of Arts and Social Sciences, Theo van Leeuwen, and RoLIA Vice President, Malcolm Stewart presented awards to: Una Butorac, James Pennington and Julian van der Zee.Mr Stewart said:

Effective journalism and a free press are critical in ensuring Australia remains a country with a legal system that operates and is underpinned by the principles of the rule of law.

The students’ lecturer for their subject on regulation of the media, radio broadcaster Phillip Clark, was also present to congratulate the students.

The question students were required to address was:

“In the wake of the Murdoch phone hacking scandal in the UK, Lord Justice Leveson opened the public inquiry on 14 November 2011, saying: “The press provides an essential check on all aspects of public life. That is why any failure within the media affects all of us. At the heart of this Inquiry, therefore, may be one simple question: who guards the guardians?”
Critically examine the role of the media as the “fourth estate” in the context of issues raised in the Leveson hearings and the Finkelstein Inquiry. To what extent should journalists be held accountable in a society governed by rule of law?

RoLIA would like to thank all the participants in the competition and Associate Professor Tom Morton, Director of the Australian Centre for Independent Journalism.