Chipping away at the Rule of Law

There will be many lessons from the war in Ukraine, some of which are already apparent. Others will emerge over time as liberal democracies recognise they have been complacent about the one idea that sets them apart from autocracies: the rule of law.

It is the fate of this generation to once more face down the enemies of democracy. And in the long term, the crucial battle will be the battle of ideas.

Yet are we up to it? In this country, evidence of complacency is everywhere.

If free societies are to prevail, they first need to restore their foundations. Chipping away at concepts like the presumption of innocence and the right to a fair trial might be convenient while riding a populist wave of hysteria. But it comes at a cost.

In the space of a week we have seen clear evidence that those ideas are being ignored or viewed with disdain by public figures and parts of the media – all of whom should know better.

One of the great hallmarks of the rule of law is an independent judiciary, an impartial arbiter that resolves disputes using settled principles of law.  This system deserves universal respect not because judges are superior beings – which is sometimes not the case – but because the system they serve is the antithesis of mob rule.

This is what distinguishes this country from hell holes like Putin’s Russia and Xi’s China where life and liberty can be snuffed out at the whim of the ruling clique.

In free societies, the independent judicial system is the guardian of liberty. It defends us from mob rule and the misuse of state power by invoking the presumption of innocence and the right to a fair trial.

Yet consider what has happened in the past week.

In Canberra, the man charged with sexually assaulting former Liberal staffer Brittany Higgins has flagged moves for a permanent stay of proceedings that would prevent this affair from ever coming to trial.

A stay would be granted if a judge determines that a fair trial is impossible because public figures – including journalists and politicians – have tainted the jury pool by pre-judging this case.

Such an outcome would confirm widespread ignorance about the presumption of innocence.

In Darwin, the acquittal of policeman Zachary Rolfe on a murder charge has been denounced by some as a denial of justice by a racist system – an accusation that rests on no evidence. 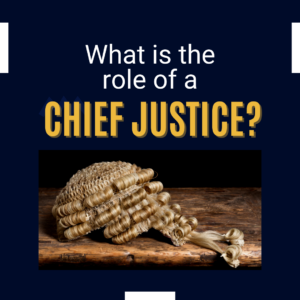 In an a video interview for the Rule of Law Institute, Bell cited what could be an even greater threat to the role of the independent judiciary: the statement by an unnamed former US President, while standing next to a judge of that country’s Supreme Court, that he expected his judicial nominees to “do the right thing” by his or her appointor.

Bell cited the same incident on March 7 during an address to a ceremonial sitting of the Supreme Court after he was sworn in as NSW Chief Justice, describing it as a medieval concept that is anathema to and corrosive of the rule of law.

In his interview with the Rule of Law Institute, the Chief Justice explained that by referring to that incident he wanted to make the point that the rule of law, while important, is fragile.

“It can easily be corroded and quite quickly, and not only in authoritarian regimes, but in countries which are not necessarily dissimilar to our own,” he said.

“So whilst I think that the rule of law is a central component of Australian democracy, it is something that requires eternal vigilance in terms of keeping respect for the rule of law prominent in ensuring that society, not just lawyers, understands what society means by the rule of law and why it is so important to a functioning democracy.”

On the presumption of innocence, he said it was important that people should not be convicted and besmirched without proper process.

“The presumption of innocence is central to our judicial system and any criminal lawyer can tell you any number of cases where an apparently strong case has not been made out where the evidence turns out to be unreliable, even though somebody might think it’s obvious that somebody has committed a particular offence . . . We have to be very careful that people aren’t convicted in the media where there hasn’t been proper process.”

He believed it was important for the rule of law to be understood as the antithesis of arbitrary rule.

“Explaining the rule of law in those terms is very important in the context of contrasting our society and our community with the examples of authoritarianism which we are seeing on the rise.

“It’s something that can’t be taken for granted. It’s a value which needs to be understood by young people coming through schools and universities which become, as voters and adults, a critical part of our democracy, so that’s why there needs to be a sense, not only of constant vigilance but also strong educational initiatives that are taken to make sure that an abstract concept is understood to have very concrete ramifications,” Chief Justice Bell said.

– Chris Merritt, Vice President of the Rule of Law Institute of Australia