Introduction to Bail and the Rule of Law 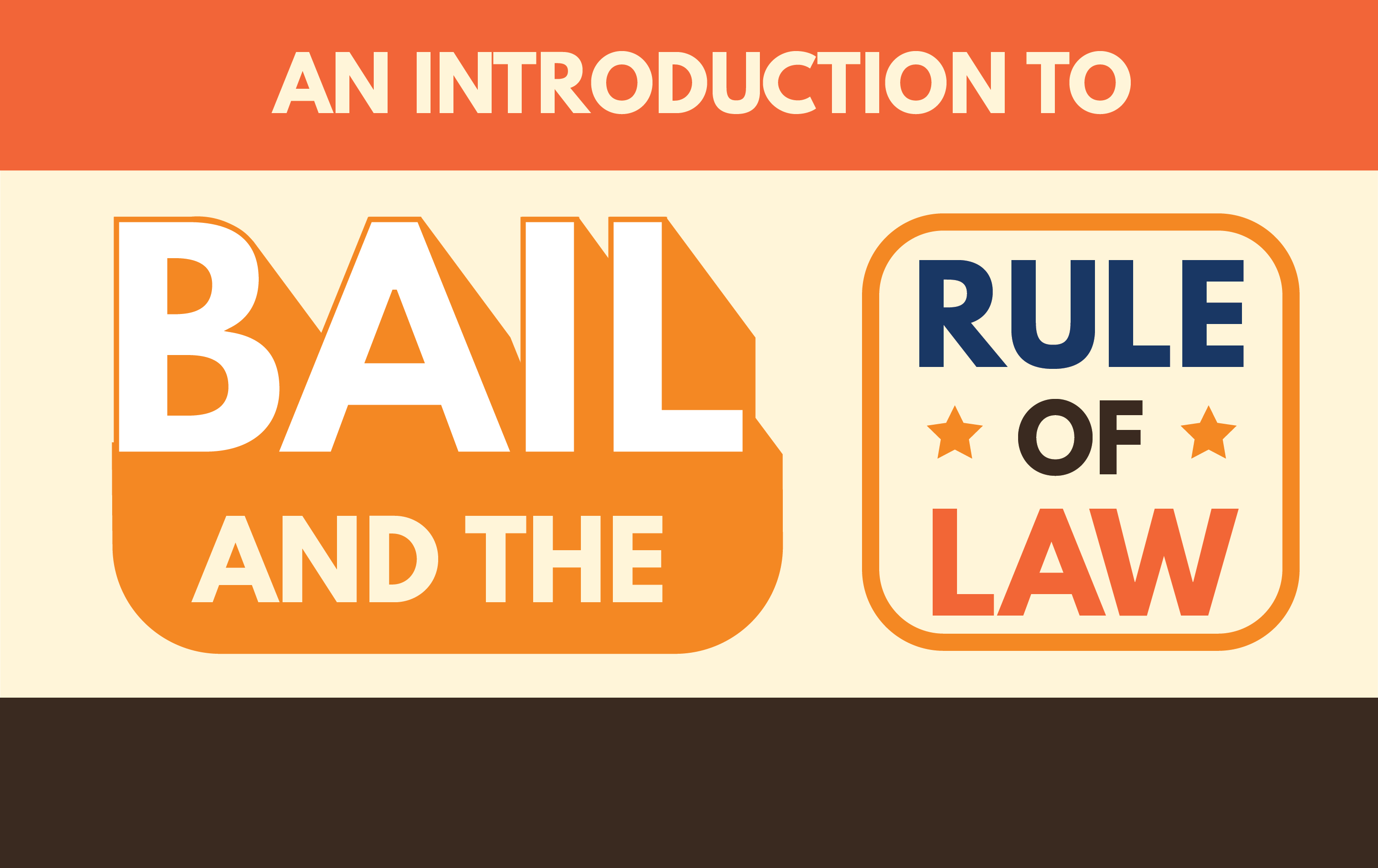 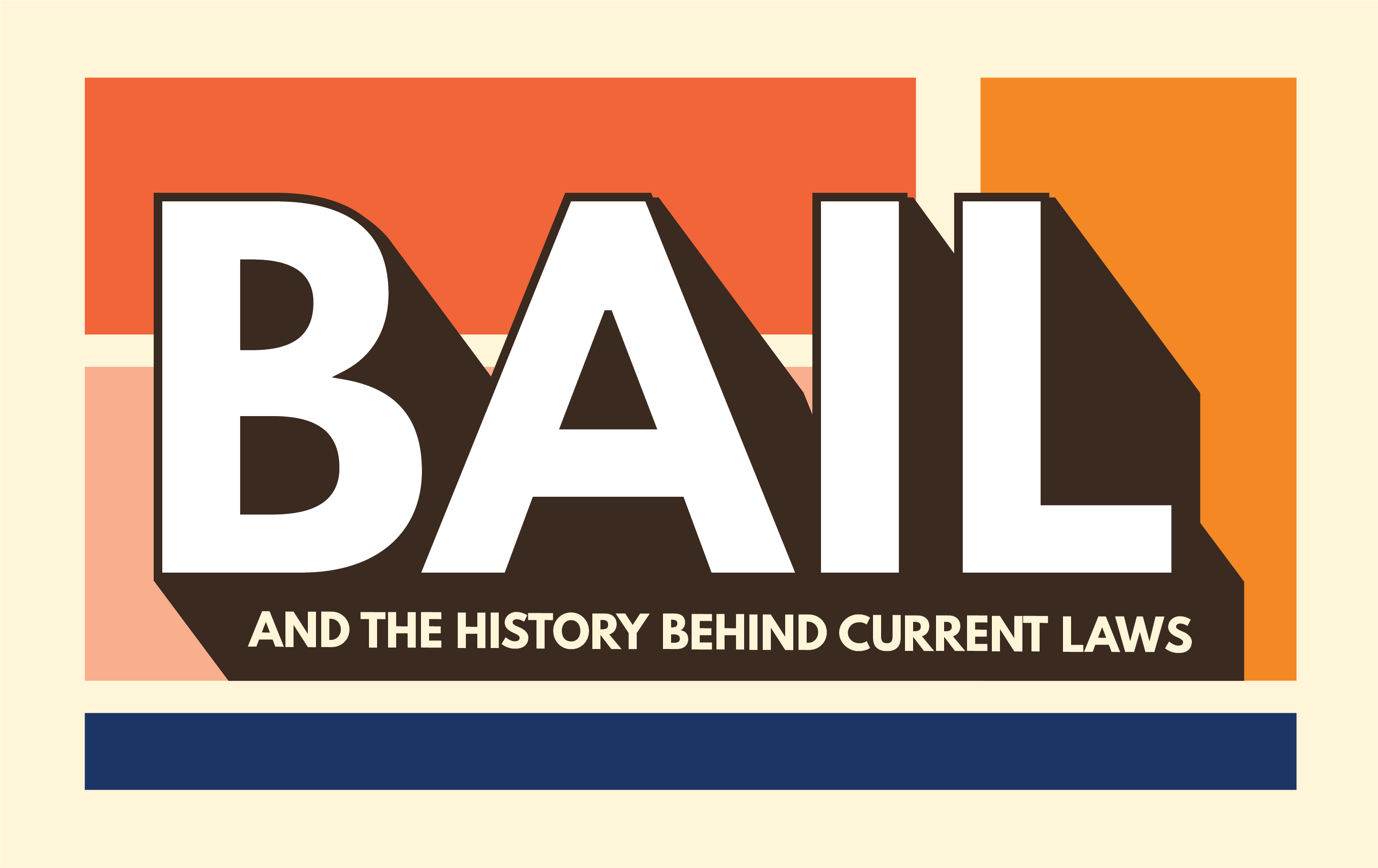 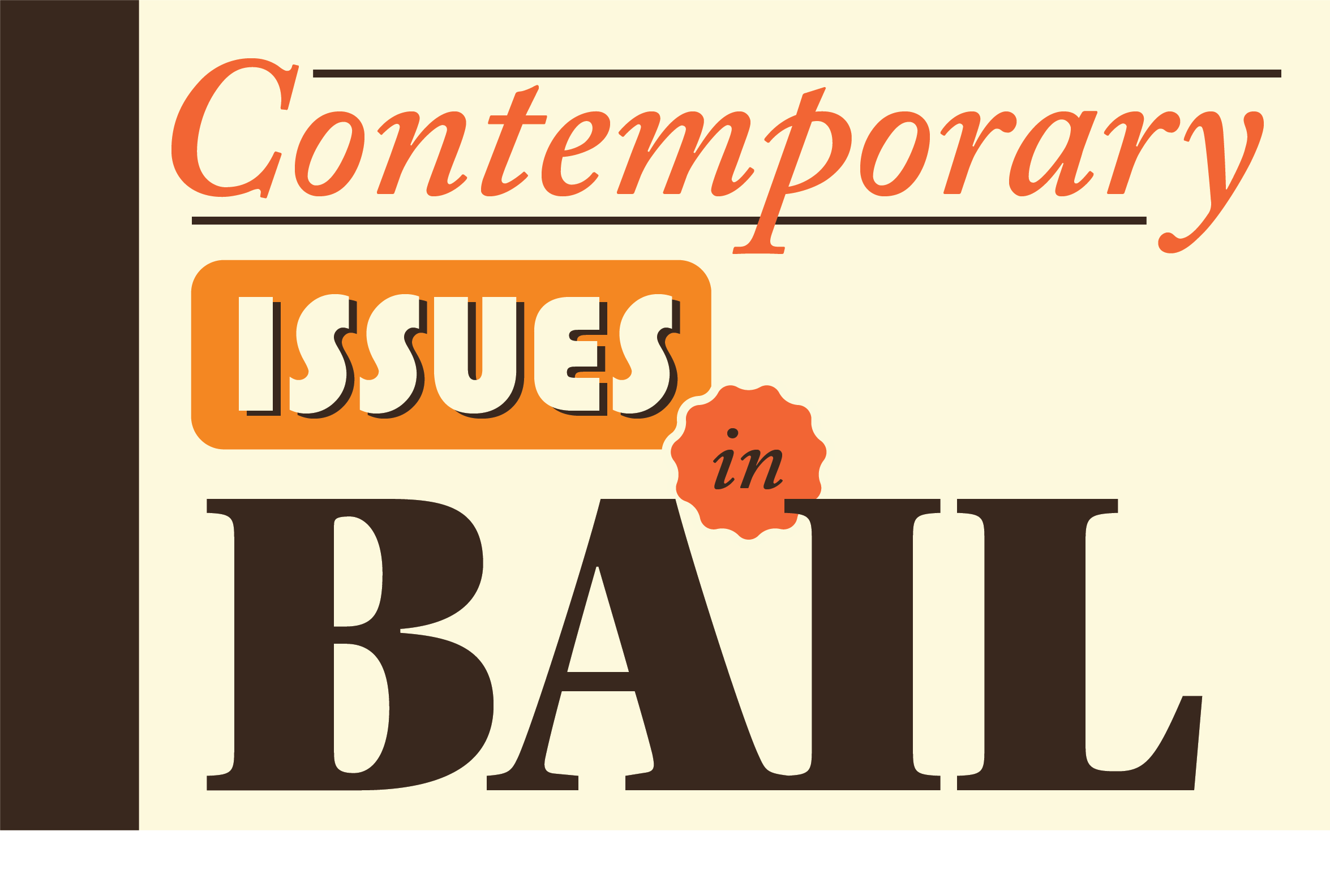 Bail and the importance of liberty are well known concepts in the contemporary public sphere. Bail determines whether an individual may return home while awaiting trial or remain in custody, with or without conditions. Yet in contemporary society, it is commonly misconstrued as a way to punish offenders who have not been formally found guilty or as a ‘get out of jail free’ card used by the wealthy and powerful.

For this reason, it might be surprising to learn that the concept of bail is a critical aspect of the rule of law and is an example of how our legal system reflects principles such as the presumption of innocence. When considering an application for bail, the bail authority weighs up their right to liberty against other considerations, such as the safety of the community, the interests of justice, and the need for the accused person to appear at court as part of the trial process. It can take months or even years before a matter comes to trial.

Why does it matter?

The media grapples with the topic of bail quite often due to high profile events such as the ‘Lindt Café Siege’ in Sydney 2014, the ‘January 2017 Melbourne car attack’ on Bourke St or the recent string of car crashes that are sparking contemporary QLD bail law reform. If you weren’t aware, these events are linked to bail because they were all caused by individuals who had been released back into the community on bail.

The antagonistic light the media paints accused criminals in can make us distrust the bail process. These resources provides a greater understanding as to why alleged offenders are released into the community throughout the trial period.  We want the public to feel safe in their community, as we understand that bail is a reflection of important human rights and rule of law principles.

The primary principles which underpin bail legislation across all States and Territories include the Presumption of Innocence and the Right to Liberty and are part of the larger framework of the rule of law. The bail process must uphold these principles to ensure we maintain a fair and just legal system.

In our society based upon the rule of law, a person can only be punished for a breach of the established laws of the land.  A person is only considered guilty for breaking a law when the justice system, based upon satisfactory legal evidence, rules that the accused is guilty.  Before this time, even if an accusation has been made, the accused is still considered innocent according to the law.  The principle is called the Presumption of Innocence.

The presumption of innocence ensures that people are not punished before being found guilty of the crime they are accused of, and is an important check on the power of the government.  It protects the rights of the accused and must be protected at all times.

2. Everyone charged with a criminal offence shall have the right to be presumed innocent until proved guilty according to law.

However, the presumption of innocence is not absolute – there are good reasons why a person can be deprived of their liberty before being found guilty. Bail is one such example. The process of granting or refusing bail in the courts must carefully considered to ensure there is an appropriate balance between the rights of the individual to be presumed innocent with the safety of the community.

The ALRC (Australian Law Reform Commission) discusses this balance regarding bail that is;

‘process-oriented’, aiming to ensure that the accused re-appears in court either to face charges or to be sentenced

a person who is on bail before trial has not been convicted of an offence, and this accords with the principle of the presumption of innocence

Article 9 of the ICCPR dictates that persons will

‘not be subject to arrest and detention except as provided for by law, and provided that neither the arrest nor the detention is arbitrary’

If an individual is arrested, they should be informed of the reason for their charges and must be tried before court within a reasonable period according to Article 9 of the ICCPR (International Covenant on Civil and Political Rights). The bail process must consider the weight of depriving someone of their freedom as they await trial and must seriously consider other mitigating and aggravating factors.

Interrelationship of Bail and Rule of Law

Therefore, the rule of law has an integral role in shaping bail laws as its principles are based on the presumption of innocence and right to liberty. The legal system must be careful to create a process that upholds the true purpose of bail and ensure that bail laws remain appropriate for securing those objectives. 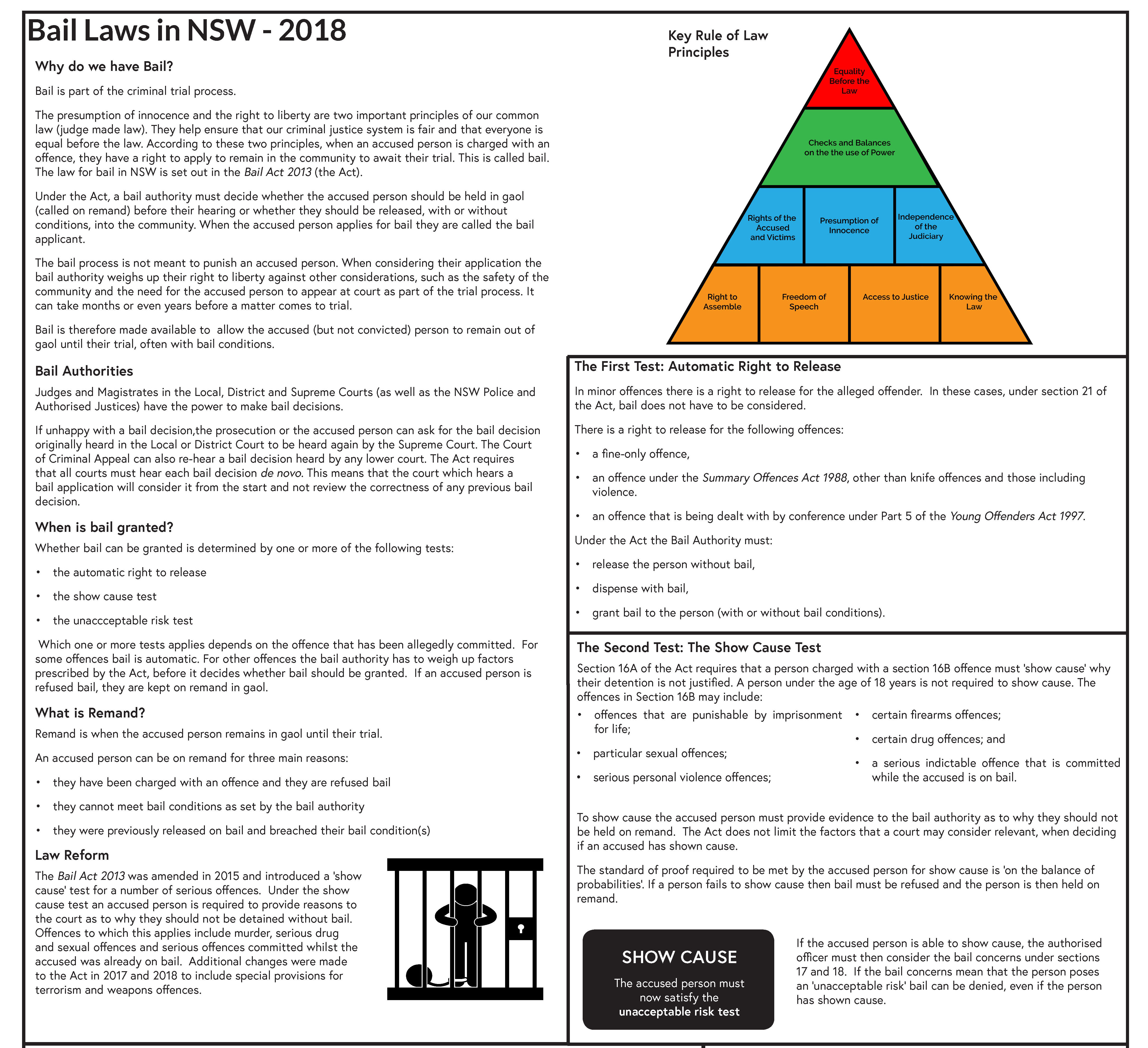 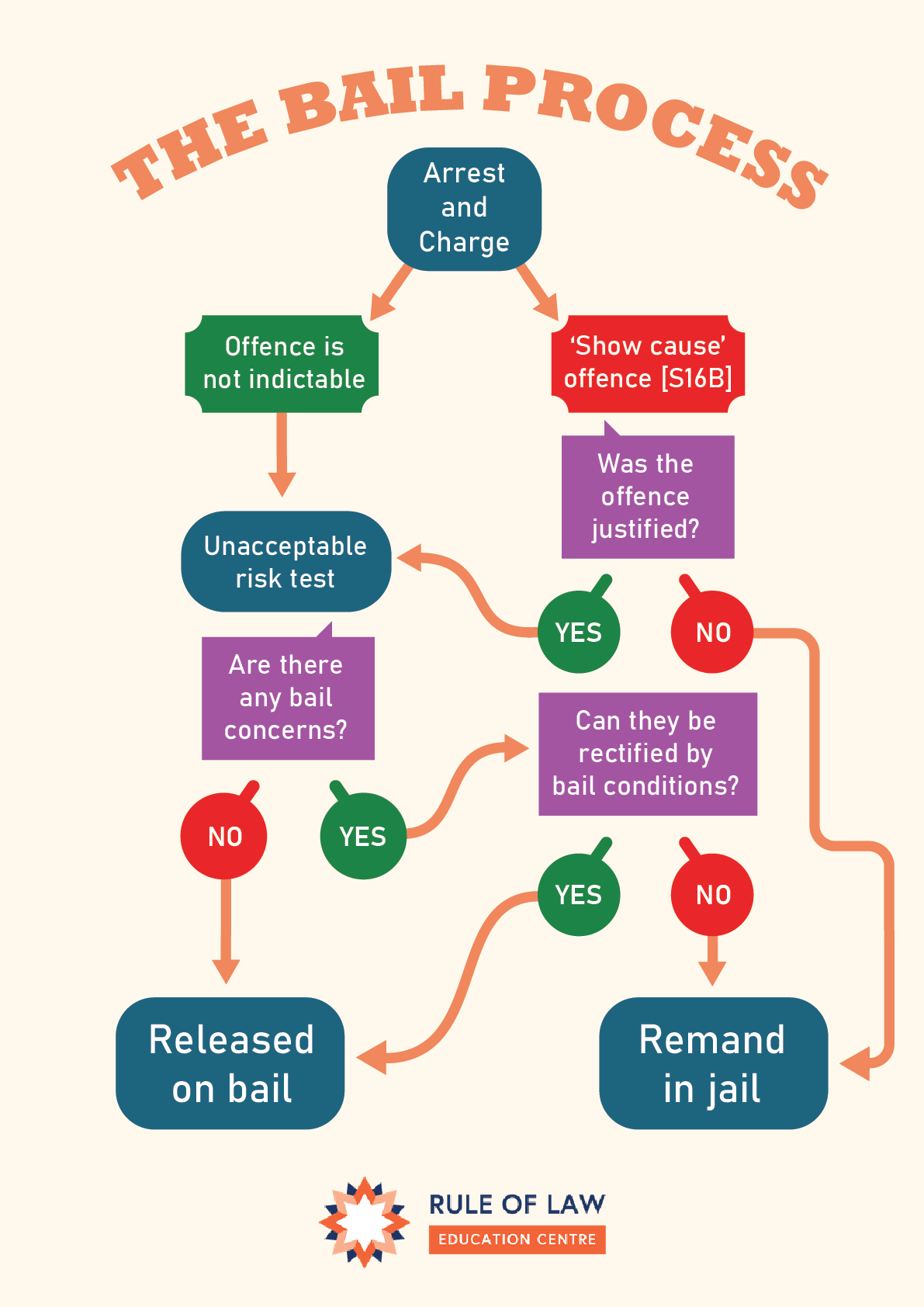