Students can learn about the medieval story of King John and how he was forced by his barons to seal an agreement outlining basic expectations regarding liberty and justice for the people of his kingdom. This historical treaty was called the Great Charter, now known as Magna Carta.

This ancient manuscript aimed to protect human rights so long ago and became the genesis of a concept known as the rule of law. By sealing Magna Carta, King John agreed that he himself will also be subject to the law and fairly administer justice. Its legacy underpins important values and institutions in Australian society today such as the Constitution, Parliament, Judiciary and the Executive.

The rule of law is
“where all people, including the government are ruled by the law and obey it’
(abridged definition by Emeritus Professor Geoffrey Walker)

World Human Rights Day is an opportunity to share with your students the importance of human rights and why they must be preserved for all people across the world.  See the below resources to help support you in the classroom teaching your students about Human Rights. 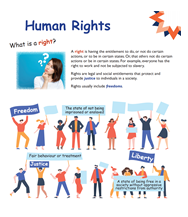