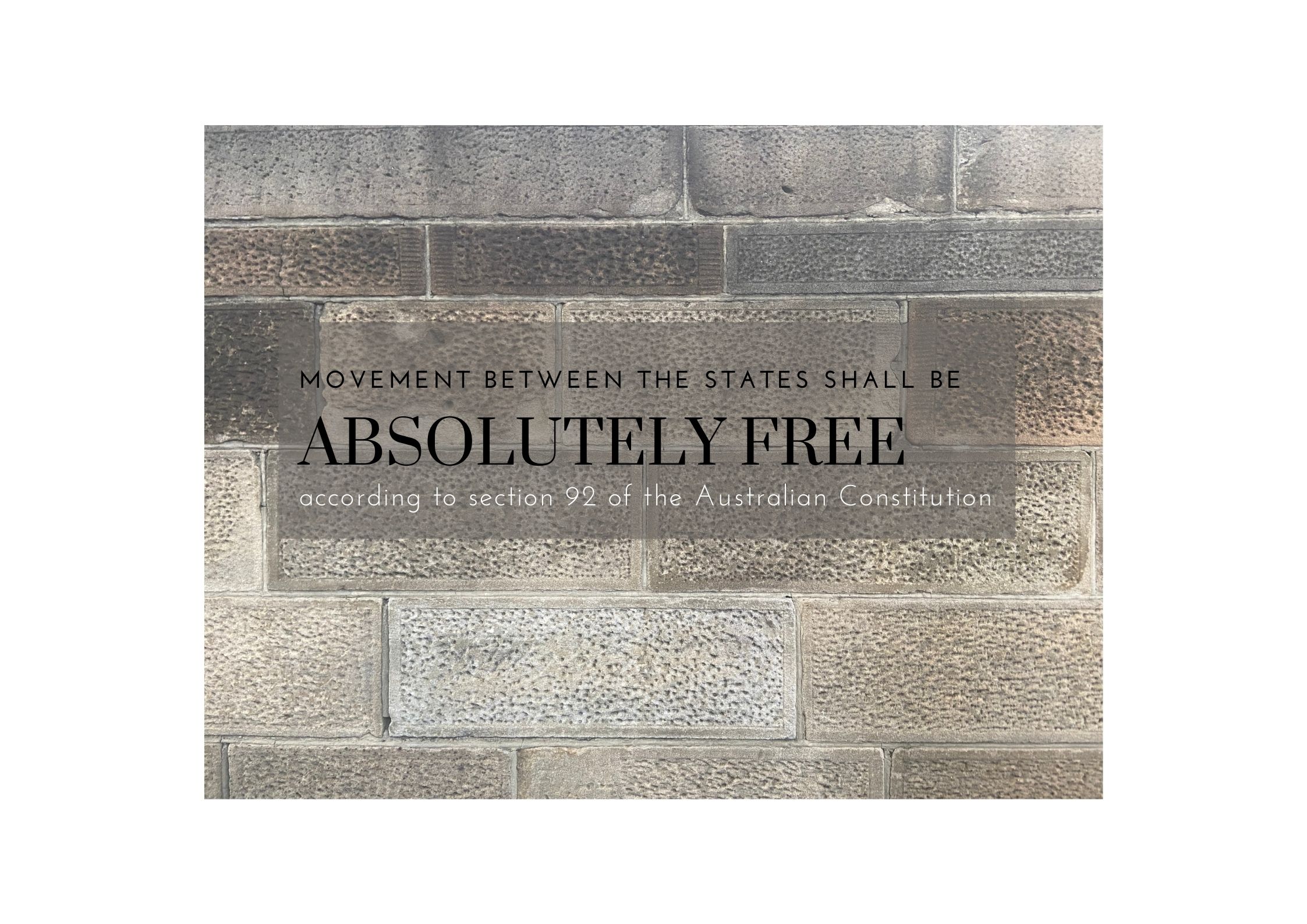 Read our Simple Explainer: Does the Constitution allow the States to Close their Borders?  https://www.ruleoflaw.org.au/constitution/border-closures/

The High Court told Clive Palmer last November that his challenge to Western Australia’s border closure had failed. But it made him wait until this week before telling him why. The delay has been worth it.

The five judges who heard Palmer’s challenge produced four judgments on Wednesday that run to a total of 105 pages. There was little comfort for the Queensland businessman but that was always going to be the case.

There was, however, a small glimmer of hope for those who have been startled by the way some premiers have conducted themselves during the pandemic. It’s as if they believe Australia is merely a collection of self-governing fiefdoms, not a unified nation.

The judges have provided valuable historical material from the 1890s that provides an insight into what Henry Parkes, the father of federation, intended when he proposed the open-border principle that became section 92 of the Constitution.

This makes it difficult to avoid the view that Parkes would have been disappointed that the Constitution he helped develop has given the all clear to the hard border WA imposed last year.

Yet the blame might rest with the respect the framers of the Constitution gave to Parkes’ own rhetoric, which is reflected in section 92’s stirring but imprecise guarantee that trade, commerce and intercourse among the states shall be “absolutely free”.

Wednesday’s judgment is valuable for another reason: Three judges, a bare majority on the five-judge bench, decided to overhaul section 92. And they have done so in a way that might ease the procedural burden confronting those who challenge states that close their borders.

In broad terms, there is no longer a need to show that a state has erected a barrier that discriminates against the rest of the nation for a protectionist purpose.

All that is necessary is to show that the barrier discriminates.

Before the judgment was handed down, legal academic Anthony Gray of the University of Southern Queensland had proposed this change in a chapter in the recently published book Fundamental Rights in the Age of COVID-19.

He wrote that it would reduce the opportunity for states to erect barriers to free trade, contrary to the vision of the founding fathers.

After Wednesday’s judgment, Gray said the new formulation would make it easier to show section 92 has been breached. But he was concerned about the way structured proportionality had been applied in Palmer’s case.

“We just don’t know yet whether it will make the job of states more difficult to defend. And it’s because of the way structured proportionality is being applied. Three of five judges applied it and all found in favour of the state,” Gray says.

This decision needs to be kept in perspective. The court accepted that WA could close its border. But it did so after basing its decision on submissions from WA that, in one respect, must now be open to question – if not ridicule.

At paragraph 80 of the joint judgment of Chief Justice Susan Kiefel and Justice Pat Keane, they write: “ … the defendant’s submission that there is no effective alternative to a general restriction on entry must be accepted”.

The reformulation of section 92 falls well short of the vision of Henry Parkes. But it is a step in the right direction – albeit a small one.

It was supported by just three judges which means its future depends on the two newest judges: Simon Steward, who joined the court after the Palmer challenge, and Jacqueline Gleeson who takes her seat on March 1.

In the next case on section 92 the views of Steward and Gleeson will be crucial. If they side with Chief Justice Kiefel and justices Keane and James Edelman, the reformulation will be confirmed as the biggest change to this provision since the 1988 decision in a case known as Cole v Whitfield.

This part of the Constitution has never lived up to the expectations of Parkes who proposed at the First National Australasian Convention in 1891, that “trade and intercourse between the federated colonies … shall be absolutely free”.

He told that convention:

Australia shall be free – free on the borders, free everywhere – in its trade and intercourse between its own people; that there shall be no impediment of any kind – that there shall be no barrier of any kind between one section of the Australian people and another; but that the trade and the general communication of these people shall flow on from one end of the continent to the other, with no one to stay its progress or to call it to account …

“It is, indeed, quite apparent that time, and thought, and philosophy, and the knowledge of what other nations have done, have settled this question in that great country to which we must constantly look, the United States of America,

The tragedy is that Parkes died in 1896, before the last two federal conventions.

His rhetoric was never given the precision it deserved.

This article was orginally published in the Australian Newspaper on 26 February 2021.