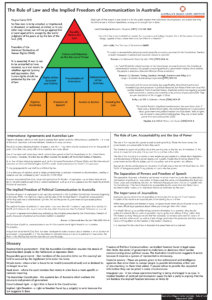 Download our NEW A3 Resource on the Implied Freedom of Communication

The judges who upheld the argument of an implied freedom of communication in the above cases were of the view that the freedom is implied by virtue of Australia’s system of representative government, as established by the Constitution.

Former Chief Justice of the High Court His Honour Justice Brennan observed in Nationwide News [at 47]:

Notwithstanding this case, there has been increasing concern in recent years that the implied right of political communication is being encroached upon.

Three cases that deal with implied freedom of political communication have been detailed below.  Please note the second two cases specifically relate to protests about abortion and legislation which protects persons accessing services in abortion clinics. Teachers therefore need to consider whether it’s an appropriate case study for their students.

Libertyworks Inc  sought a declaration from the High Court of Australia that the registration provisions under the Foreign Interference Transparency Scheme Act 2018 (Cth)(FITS Act) were beyond the power of the Commonwealth Parliament to enact because they contravened the implied constitutional freedom of political communication.

Click here to read further commentary on the Libertyworks Case.

In the case of Comcare v Banerji, public servant Ms Ms Michaela Banerji’s employment was terminated on the basis that she had allegedly breached the Australian Public Service Code of Conduct. The conduct relied upon by her employer as the basis for the breach was Ms Banerji’s use of a Twitter account to post some 9,000 tweets which were highly critical of the then government, the then minister and certain policies of her public sector employer.

Ms Banerji contended that the termination of her employment was unlawful and in breach of the implied freedom of political communication identified by the High Court in Lange v Australian Broadcasting Corporation [1997] HCA 25;  (1997) 189 CLR 520.

The Administrative Appeals Tribunal held the termination trespassed on the implied freedom of political communication and Ms Banerji’s dismissal was therefore unlawful.   See details here.  Dr B Hughson, the Member who presided over the matter, observed that employees, even in private, should exercise a measure of restraint in badmouthing their employer.  Nevertheless, the burden of that duty did not go so far as to limit Ms Banerji’s implied freedom to express political opinions, given that in doing so, she occasioned minimal damage to her employer by virtue of her opinions being expressed anonymously.

In 2019, the High Court considered an appeal brought by Ms Banerji’s employer, Comcare.

The High Court observed the implied freedom of political communication is not a personal right of free speech. It is instead a restriction on legislative power which arises as a necessary implication from a reading of the relevant sections of the Constitution and, as such, extends only so far as is necessary to preserve and protect the system of representative and responsible government mandated by the Constitution.

The significance of the High Court decision is that the principles of the rule of law remain paramount.  This case confirms that protections must remain in place to allow citizens to speak out against the government.  Australia’s system of government not only provides important checks and balances on the use of government power in accordance with the true meaning of democracy, it also ensures that the government will be held accountable to public scrutiny.    Furthermore, even if a law significantly restricts the ability of an individual or a group of persons to engage in political communication, the law must not infringe the implied freedom of political communication unless it has a material unjustified effect on political communication as a whole. For all of these reasons, the Tribunal’s decision at first instance was set aside.

The High Court unanimously allowed the appeal, rejecting Ms Banerji’s arguments. By majority, Kiefel CJ, Bell, Keane and Nettle JJ confirmed that the provisions in the Australian Public Service Code of Conduct did not impose an unjustified burden on the implied freedom, and that the termination of Ms Banerji’s employment was not unlawful.

Section 185D of the Public Health and Wellbeing Act 2008 (Vic) (the Act) prohibits a person standing within 150 metres from an abortion clinic when communicating their views in relation to abortion in a manner able to be seen or heard by persons accessing or attempting to access premises at which abortions are provided, and if the communication is reasonably likely to cause distress or anxiety (“the communication prohibition“).

Mrs Clubb stood about five metres from the entrance to the East Melbourne Fertility Control Clinic where she spoke to a couple about to enter the clinic, and proffered them a pamphlet which offered counselling and assistance about pregnancy, and which the couple declined.

Mrs Clubb was convicted in the Magistrates Court of Victoria for breach of the Act. The matter was then appealed to the High Court

Section 9(2) of the Reproductive Health (Access to Terminations) Act 2013 (Tas) (the Act) prohibits protests in relation to abortions that are able to be seen or heard by a person accessing premises at which abortions are provided (“the protest prohibition“). The law has a similar geographic restriction to the Victorian law of 150 metres. Mr Preston stood on the footpath outside Specialist Gynaecology Centre in Hobart on several occasions holding placards containing words and images of fetuses indicating his opposition to abortion. These placards were visible to persons who might enter or attempt to enter the Centre.Mr Preston was convicted in the Magistrates Court of Tasmania for breaches of the Act.

The Appeal to the High Court

Mrs Clubb and Mr Preston appealed their matters to their respective state Supreme Courts and the issues of implied freedom of political communication were removed to the High Court (Clubb v Edwards; Preston v Avery ). They argued the legislation on which their two convictions were based interfered with the implied freedom of political communication and were thus invalid.

They asked three questions as a test which weighed up whether the state legislation impacted disproportionately on the implied freedom of communication; which would in turn have a detrimental effect on our democracy and representative government. The three questions asked were:

The High Court unanimously found safe access zones around reproductive health clinics to be constitutionally valid and dismissed both appeals. They did however differ in their views as to whether they could assess the constitutional validity of the Victorian laws. The Majority (Kiefel CJ, Bell and Keane JJ and Nettle J writing separately) found that they could determine the validity of the Victorian laws for a number of reasons.

Gageler, Gordon and Edelman JJ, wrote separate judgements. They determined they should only consider the appeal of Mr Preston as his communication was political in nature differing in that respect, from the facts in  Mrs Clubb’s case.

All justices agreed that Mr Preston was involved in political communication and dismissed the appeal. They found that the Tasmanian legislation differed from the Victorian legislation in that it does not expressly state its objects, it is directed at a protest about abortion, and its scope is not limited by a requirement that the protest be reasonably likely to cause distress or anxiety. In applying the McCloy test, the majority (Kiefel CJ, Bell J, Keane J and Nettle J found:

The Tasmanian statute was adequately balanced for the same reasons as the Victorian: it was geographically restricted, imposed a slight burden, and did not discriminate between sides in the debate.

Gaegler J, in a minority judgment  found that the purpose of the protest legislation was to ensure that women had access to premises where lawfully provided in an atmosphere of privacy and dignity. This purpose is constitutionally permissible and, by any objective measure, compelling.

The tension between implied freedom of political communication and citizens enjoyment of other rights was eloquently expressed by  Edelman J in his dissenting judgement in the Preston case:

…courts cannot substitute their own assessment for that of the legislative decision-maker … The Act…ensuring that women have access to termination services in a confidential manner without the threat of harassment… is concerned with basic issues of public health. These social human rights goals involving respect for the dignity of the human person involve deep-seated issues of public policy within the legal system generally.” [499]

Alex Deagon of the University of Queensland also sums up the crucial issues in the case below:

Justice Edelman insightfully observes that perhaps the outcome in these cases says more about Australia’s constitutional and political system than anything else (see [502]-[508]). While the US allows significant and controversial law reform to be driven by judicial decisions, Australia has more faith in democratic (legislative and political) processes to achieve policy outcomes.

Similar legislation in other states are:

These laws, in general terms, ban different sorts of communication about terminations of pregnancies, in the interest of protecting the privacy and dignity of women seeking medical treatment.