There are a number of defences against criminal charges that the Defence can use to absolve the accused of criminal liability, to varying extents. Some major defences are listed below: 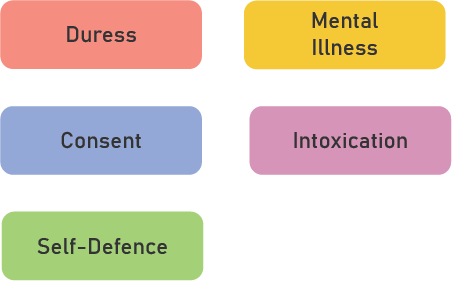 Duress
An accused person may argue that the crime in question was committed under duress. This means that they were forced to take illegal action against their will, typically because they have been threatened or intimidated by another person. For this defence to succeed, there must be evidence of an intentional threat that was serious enough to justify the illegal conduct of the accused. You can read more about duress as a defence against a criminal charge at this publication written by the Judicial Commission of NSW.

Consent
The issue of consent applies largely to charges of sexual offences, larceny or assault. The defence must be able to prove that the victim gave a reasonable expression or implication of consent that would justify the actions of the accused. For example, a boxer would be able to invoke the defence of consent to protect themselves against a charge of assault within the context of a boxing match; by entering the match, the victim would have impliedly consented to a degree of physical harm.

Self-Defence
An accused could argue that their actions that would otherwise constitute assault or murder were justified by self-defence, in that they were acting to protect themselves, their property or another person from the illegal conduct of another. In order for the argument of self-defence to succeed, the Defence must be able to prove that the accused held the reasonable belief that their actions were appropriate in response to the threat they faced. You can read more about self-defence as a defence against a criminal charge at this publication written by the Judicial Commission of NSW.

Mental Illness
If the accused was suffering from a mental impairment at the time of the offence, they may be able to use it as a defence against any charge, even murder. However, rigorous medical assessments are required to prove that the impairment is authentic, and even when the defence of mental illness is successful, the accused would likely be detained in a mental institution until they are fit to be released, depending on the threat they pose to the wider community.

Intoxication
This defence is only applicable against charges of ‘specific intent, that is, offences that require proof that you intended to bring about a specific result, such as the death of another individual. The accused may be able to employ this defence to argue that their intoxication at the time inhibited their ability to form good intentions. This argument will not succeed unless the Defence is able to prove that the intention behind the accused’s actions was entirely dependent on their intoxication. For example, if there was proof that the accused planned a murder prior to becoming intoxicated, this defence would not succeed.

The Role of Juries