In most criminal court proceedings, there are a number of central roles that are needed to represent the parties at trial, as well as some people that may be there to observe, record or assist in the trial, but are not directly involved in its course.

The central roles of the people in a criminal trial are illustrated below: 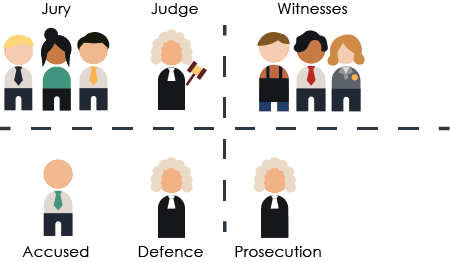 In New South Wales, judges are appointed by the Governor of NSW. Their role is to interpret the laws made by Parliament and apply both statute and common law to cases while at all times remaining impartial. Judges act as referees in court, making decisions on matters of law and the conduct of proceedings according to strict legal rules. Additionally, judges have a role in ensuring the integrity of evidence introduced in a criminal trial, to ensure that justice is not only done, but seen to be done.

They also give directions to juries about their role and purpose in the criminal trial process.

In performing their role, it is vital that judges remain independent of parliament and government. This is known as the separation of powers doctrine and it is a vital ingredient in our democracy. The separation of powers doctrine is not unique to NSW. It applies to all states and territories of Australia and is enshrined in the Australian Constitution.

Juries are an integral part of the criminal trial process and the importance of their role should not be underestimated. Learn more about juries at (j) The Role of Juries.

According to the website of the Federal Court of Australia, “A witness is a person who has information which may be useful in a case being heard in a Court. This information is called evidence [or] testifying”. Witnesses will be asked to come into court in person to give their testimony and may be served with a subpoena, or an order of the court if they refuse. Disobeying a subpoena is a chargeable offence.

Often, witnesses will “have seen, heard about an event which is related to a case and [are] able to say how it happened. This is called being a ‘witness of fact’”. Alternatively, ‘expert witnesses’ may be called in to provide specialist knowledge. Expert witnesses have an overriding duty to assist the Court impartially on matters relevant to the expert witness’s area of expertise.

Learn more about witnesses at (g) The Use of Evidence.

The accused is the person charged with committing a criminal offence and is also known as a defendant. This person may be asked to give their testimony of events and holds a constitutional right to do so or to refuse to do so, which is called the right to silence. Whether they choose to testify or not, the court must grant them the opportunity to voice their experiences under a legal oath to tell the whole truth. Lying or otherwise obfuscating the truth in court constitutes an offence known as perjury.

The Defence is the party that seeks to defend the accused in court. During a hearing, the Defence is usually comprised of a barrister to act on behalf of the accused, often with a legal solicitor to aid them.

While the presence of barristers and solicitors is typical, the accused holds the right to represent themselves in court in place of any lawyers, though given the complexity of the law and the experience needed to navigate it, self-represented litigants are at a significant disadvantage. People may still choose to represent themselves as employing a qualified Defence team is often costly. However, in order to uphold the accessibility of justice (see (e) Access to Justice), government Legal Aid services exist to provide legal representation to financially disadvantaged individuals.

It is important to understand the Defence has a different evidential burden to that of the Prosecution. It is not the job of the Defence to establish the innocence of the accused against a presumption of guilt. It simply has to ensure there is sufficient evidence of a defence, enough to establish reasonable doubt or an alternative explanation.

The Prosecution is the party that opposes the Defence, seeking to present a case against the accused. In lower courts such as the Local Court (see (a) Court Jurisdiction), the Prosecution may be represented by a police sergeant (typically with a traineeship in prosecution), a council or RSPCA officer, (in animal abuse cases) or a lawyer representing the Roads and Maritime Services, depending on the offence. In higher courts dealing with more serious offences, a Crown Prosecutor takes on the role of the Prosecution. Crown Prosecutors are barristers who represent the State, working under the Office of the Director of Public Prosecutions, or the ODPP, which is an independent government agency responsible for prosecuting serious criminal offences.

The Prosecution will succeed if it has managed to establish each element of the offence by way of evidence and a jury is satisfied that this has occurred beyond a reasonable doubt. Learn more about the roles of the Prosecution and Defence at (f) Burden and Standard of Proof.