When charged with a criminal offence, the accused is given an opportunity to plead guilty or not guilty. This means that either the accused admits their guilt, forgoes a trial and accepts their sentence, or the accused claims that they are innocent, and must undergo a trial to prove it in a court of law. This process is illustrated below: 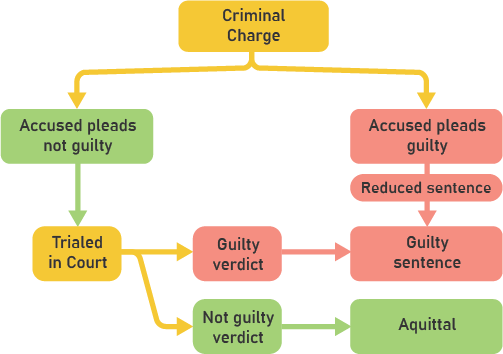 A charge is a government accusation against an individual, which asserts that they have committed an offence. A charge is usually lain upon a person following an arrest, and is then disputed in a courtroom if a trial takes place. In the context of criminal law, there are two types of offences that one can be charged with: summary offences and indictable offences. 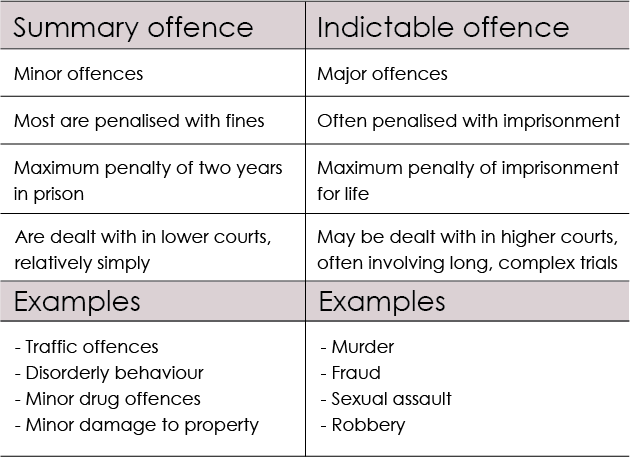 Some lesser indictable offences, such as stealing, may be dealt with ‘summarily’ if the Prosecution and Defence agree that the particular offence is not deemed serious, meaning that it will be treated as a summary offence. To this end, the matter would be handled quickly and with less formality, possess the maximum penalty of two years imprisonment, and be heard in a lower court.

When an individual has been served with a charge, they maintain the right, should they believe it necessary, to engage in ‘plea bargaining’. This process is a negotiation between the Defence and the Prosecution to reassess the charges against the accused, potentially reducing the severity or number of charges in exchange for the accused to plead guilty without contest. Regardless of if plea bargaining is used, those who enter into a guilty plea at the earliest opportunity are entitled to a reduction of their sentence of up to 25%. The reason behind this is that if a guilty person pleads guilty, they remove the need for a trial to be held, and are able to fast-track their process to the sentencing stage.

Alternatively, the accused may choose to plead ‘not guilty’ if they believe they are innocent of the charge they have been served with. The court will then set a date for a hearing or trial in which the accused’s Defence must disprove their guilt on their behalf. However, if they are found guilty through the proceedings of a trial, their sentence will be substantially more severe than if they had pleaded guilty.