The Role of Juries

Juries are an integral part of the criminal trial process and the importance of their role should not be underestimated. Australian democracy is underpinned by citizen particpation. The jury system enables Australian citizens who are over the age of 18 to particpate in the legal system and is central to Australia’s justice system.

The Australian Constitution states ‘the trial on indictment of any offence against any law of the Commonwealth shall be by jury’ and as such, juries are typically used for federal offences which are the most serious of criminal offences, as well as crimes subject to state laws.

The NSW jury service system is regulated by the Jury Act 1977.

Juries are used in both criminal and civil cases. Jury trials occur in State District, Supreme Courts, and Federal Courts.  Jurors are randomly selected from the Australian electoral roll and added to a jury roll. People on the jury roll are randomly selected and sent a summons to attend court, where they may be selected as a juror for a specific trial. All Australians eligible to vote can be summoned as jurors subject to some exclusions and exemptions. For criminal trials juries typically consistent of 12 people. In a criminal trial the juries role is to hear the evidence, listen to the arguments and determine whether the defendant is guilty or not guilty of the offences. Juries in criminal trials were required to reach unanimous verdicts prior to 2005. Today, a jury can reach a verdict by a majority of 11 or 10 jurors in certain circumstances (Jury Act 1977, section 55F).

In New South Wales, a defendant charged with an indictable offence may apply to have their case tried by a Judge alone (Criminal Procedure Act 1986, section 132).  Trial by judge alone is not available in all Australian jurisdictions. For example, it is not offered in Victoria which is why Cardinal George Pell trials were heard by a jury. Judge alone trials are available in NSW, Western Australia, Queensland, South Australia and the ACT.  In certain circumstance a judge alone trial may be more appropriate. For example where an accused is so high-profile or notorious that their right to a fair trial may be jeopardised because a jury may not be able to be unbiased or impartial. This was why the Claremont Serial Killings case was heard before a judge alone. Judge alone trials are not available if the accused has been charged with a Commonwealth offence (such as drug importation or terrorism).

Applications for a judge alone trial will be rejected if they potentially put at risk justice being achieved for the parties. The law must seek to protect the rights of both the victim and the accused and the form of trial requires a balancing exercise in an effort to achieve fairness. The law also attempts to satisfy objective community standards.

Jury service and its relationship to rule of law principles

Jury trials provide a safeguard against the arbitrary or oppressive enforcement of criminal justice by those in authority. Juries ensure community representation informs the balancing of evidence and allows community perspective to be incorporated into the judging of those accused. Juries force lawyers to use plain english and make court proceedings accessible to the whole community.  The jury system is an integral part of the criminal trial process and the community plays its part in the administration of justice. Citizen participation in establishing rules applicable to them is an essential principle of the rule of law, which is why rule of law principles need to be understood and upheld by every Australian. 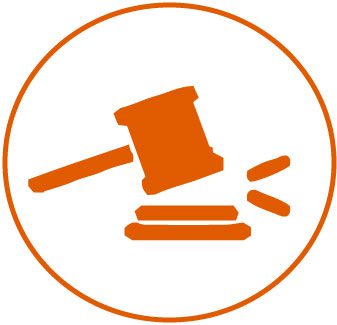