Rule of Law Institute President, Robin Speed, writes about the case of Murray Kear. A version of this article was published in The Australian Newspaper on 18/03/2015.

In 2014 the Independent Commission Against Corruption falsely accused Murray Kear, the former Commissioner of the State Emergency Service, of terminating the employment of a Deputy Commissioner in reprisal for making public disclosure complaints.  But this week Mr Kear proved his innocence.

If Mr Kear had not proved his innocence he faced the prospect of going to goal for up to 2 years.

Will anyone from ICAC be sent to gaol for making the accusation? ….. No.

Will the Commissioner who presided at the public inquiry of ICAC or who presented the accusation to Parliament go to gaol? …. No.

I first met Mr Kear when I sat through his trial during February this year.

I then found out that Mr Kear, as the Commissioner of the SES, had over a period of years up to 2012 through his leadership built up the organisation into a highly trained professional team.  It was made up of approximately 10,000 volunteers and 225 employees.  It is mind boggling to think of the skill it takes to organise these volunteers for the emergencies they deal with.

By reason of the worsening atmosphere between the two Deputies Mr Kear warned them that he was considering terminating one, or both of their employments.

In May 2013 Mr Kear terminated the employment of the new Deputy and gave as his reason loss of trust and confidence.

ICAC investigated the matter and found that Mr Kear had terminated the employment of the Deputy substantially in reprisal for making the complaints.  This is a criminal offence with a gaol sentence of 2 years or a fine.

Notwithstanding that the existing Deputy was then independently cleared of all complaints made by the new Deputy, Mr Kear was prosecuted in the criminal court; even though the underlying complaints were dismissed.

Now Mr Kear has been found not guilty.  Not simply because the prosecution failed to prove the offence beyond reasonable doubt but because he proved that he did not dismiss the Deputy substantially as a reprisal.

The results of ICAC’s falsely accusing Mr Kear have been traumatic.  He was given the option of being fired or resigning from the SES. He resigned, and lost a substantial amount of superannuation benefits. He and his family have been put under tremendous stress over the last 3 years and he has been unemployed all of this time. He has borrowed nearly $200,000 to pay legal costs in defending himself.

His career has been destroyed and the State has lost a leader.

It must also be remembered that the full force of the State was brought against Mr Kear.

Most people would have crumbled under this weight.

Now that Mr Kear has proved his innocence, one might expect an apology from ICAC, the restructuring of ICAC and the resignation of senior staff and that Mr Kear be reinstated to a suitable position of leadership in the State with a large compensation payment, and in the future, no one being presumed guilty and having to prove his innocence.

But the sad fact is that in NSW none of this will occur.  ICAC is a rogue organisation that believes it is answerable to no one, not David Levine QC (the ICAC inspector), nor Parliament, and sees no need for reform

When thinking of ICAC, remember Murray Kear, a decent man destroyed by ICAC. 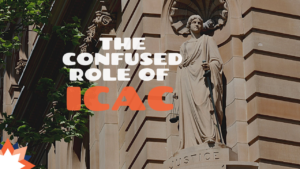 Articles and Submissions on ICAC 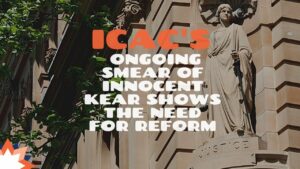 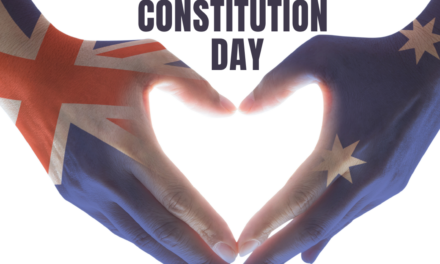 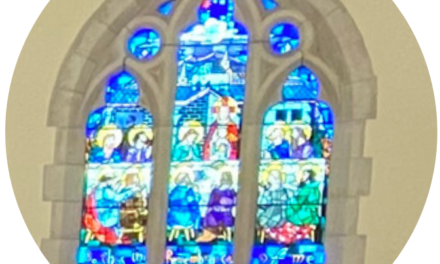 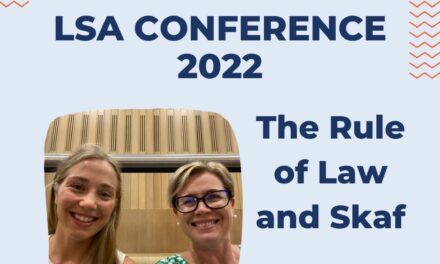